“We are looking at exports of the weaponised Hawk or Light Attack Hawk and feel that there would definitely be a requirement for this type of aircraft in many countries,” says HAL chairman T Suvarna Raju.

“We are looking at the further weaponisation of the Hawk, though it has already been declared as weapons capable to a limited extent with guns and rockets,” he adds. “We have done some trials with rocket pods and are looking beyond this.”

The Indian air force likes the upgrade proposal, and the airframer will incorporate further suggestions made by the service, Raju told Flightglobal at HAL’s corporate office in Bengaluru. 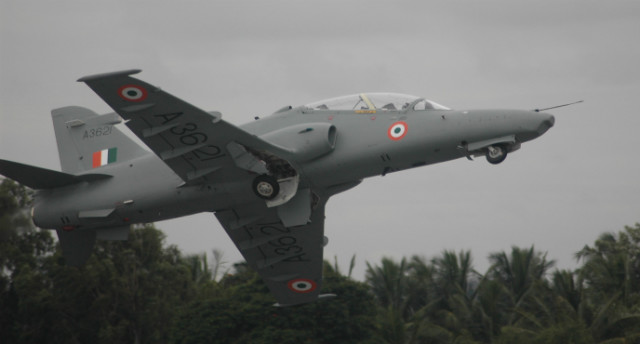 On 26 May, the airframer announced that a memorandum of understanding with BAE had been concluded, “for a Hawk Mk 132 upgrade, development of combat Hawk for Indian and export markets and maintenance solutions for supporting the Jaguar and Hawk fleet.”

“Customers have been kept up to date with developments for Hawk, which include targeting pod simulation, laser designator pod, real and simulated ‘smart’ weapons integration, helmet-mounted display system and increased thrust engine with full authority digital engine control,” said a BAE official, in an earlier email response to Flightglobal.

Commenting on the Hawk upgrade at Aero India, an MBDA official said: “Should we be asked to weaponise Hawk with ASRAAM, we would certainly be able to assist.” The company’s Brimstone “could be ideal for the Hawk," the official said. "At only 50kg [110lb] per missile, with a dual-mode seeker for added operational flexibility, this air-to-ground multi-target weapon would certainly add a major capability to the Hawk.”

HAL has proposed a unique display and avionics upgrade for the Hawk, with two large 8 x 6” multi-function displays replacing the smaller, existing displays. A moving map display will be added and electro-mechanical instruments such as vertical speed indicator and altimeter will be removed.

The Indian air force has 91 Hawks, with a single example having been lost in a crash (attributed to pilot error) in 2008. The first contract for 66 Hawk 132s was signed in 2004, which saw BAE deliver 24 aircraft in fly-away condition; HAL completed licensed production of the last of the remaining 42 in 2012.

A third contract for 20 aircraft for the air force's Suryakiran aerobatic display team has yet to be concluded.