Arora Group is proposing a terminal development concentrated on the western side of Heathrow, close to the current Terminal 5, avoiding a "disruptive" reconstruction of the airport's central terminals.

The new Terminal 6A and 6B would handle 35 million passengers, while a 6C extension would add capacity for another 15 million.

These would be combined with Terminal 5 to provide overall capacity for 85 million passengers, all of whom would be served through a "single front door", says Arora.

"This building will be a magnificent and vibrant grand space, designed to amaze passengers and capture the excitement of air travel," it adds.

But Heathrow's operator HAL is unconvinced. While it acknowledges Arora's support for a new north-western runway at the airport, it dismisses the company's plans as "a bit like the emperor's new clothes".

"The more you look, the less there is to see," says Heathrow chief John Holland-Kaye. "Not only do their proposals now cost more, but they show a complete lack of understanding of airport operators and disregard for those living closest to the airport." 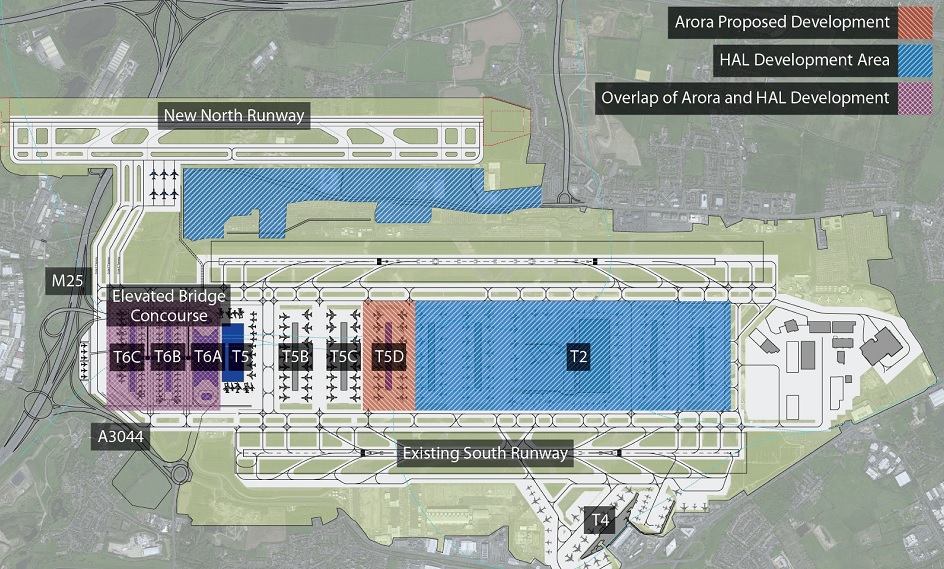 Arora puts the cost of its 'Western Hub' proposal at £14.4 billion ($19.5 billion), adding that the terminal – which includes a rail interchange – could conceivably be developed as a separate part of the expansion.

The group claims the design will ensure "maximum direct access" to aircraft for passengers, while maximising the use of runways and minimising taxi times.

"Our approach has been to work closely with airlines and to employ the world’s best and most experienced airport designers and these benefits are clearly evident in our 'Western Hub' plans," says founder Surinder Arora, criticising the "monopoly control" of Heathrow's operator.

Arora's proposal appears to have support from key operators including British Airways parent IAG, which describers the scheme as "very interesting" and worthy of proper evaluation.

Virgin Atlantic chief Craig Kreeger says the Arora plan would "bring down the cost of construction" and provide competition for development at the hub.

"At first look, this plan appears to be a credible alternative," he says.

But Holland-Kaye disagrees, insisting that – if Arora was "serious" about the proposal – the company should have submitted it to the Airports Commission "years ago", for consideration alongside the other schemes put forward.