After years of industry pushback, US Marine Corps concedes MUX too complex

The US Marine Corps’ (USMC) ambitious plan to create a vertical-take-off-and-landing (VTOL) unmanned air vehicle (UAV) that could carry out a long list of missions has been halted after years of warnings from US aerospace manufacturers that the envisioned aircraft would be expensive and require a lengthy development period.

The USMC has conceded its initial plan was too difficult. It now is working to redefine and break up the MUX mission across a “family” of UAVs, it says. 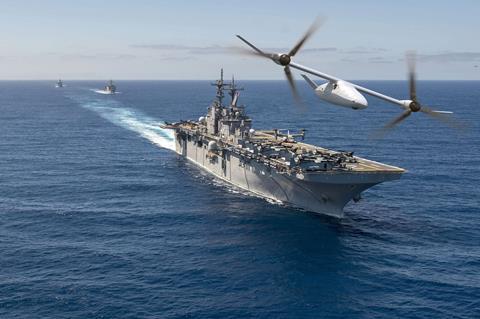 The service wanted a VTOL aircraft that could provide its amphibious assault ships with a flying package of sensors to provide early warning, electronic warfare, command, control, communications, computers, and intelligence, surveillance and reconnaissance capabilities. The UAV was also to be a long-range strike and cargo transport with capabilities similar to the Bell Boeing MV-22 and Lockheed Martin F-35. That meant a range of more than 690nm (1,280km/h) and a flight endurance of more than 24h.

“The MUX requirements, together on one platform from a ship, present a technological challenge in regards to power required and weight that incurs a scheduling cost that does not align to the [Commandant of the Marine Corps’] schedule for developing and employing capability as identified in the MUX programme,” says the USMC on 12 March. 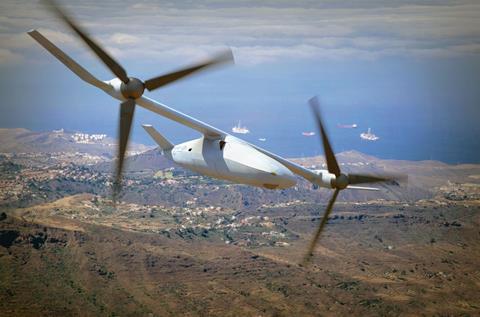 In response to the service’s vision, Bell proposed its V-247 Vigilant tiltrotor and Northrop Grumman proposed its Tern tailsitter concept.

One way the USMC plans to reduce complexity in its rejiggered MUX programme is to divide work between a land-based UAV and a Medium Altitude Long Endurance (MALE) UAV for ship-based operations. Tier 1 capabilities remain the priority, the service says.

“The vision is a family of UAS distributed across the force that accomplish the totality of the MUX [Initial Capabilities Document] with relevant depth and persistence,” says the USMC. “For example, the MALE UAV can cover Marines 24/7 when the shipboard capability is out of range or in port.”

The USMC says it is currently refining specific MALE requirements.

The service received early pushback from aerospace manufacturers who believed that they were asking too much out of a single aircraft, but pushed onwards anyways believing the all-encompassing requirement could be done. MUX was originally conceived in 2016.

The USMC is eager to create aircraft with a robust sensor and communication package to help warn and protect its amphibious assault ships from adversaries with long-range anti-ship missiles.

Amphibious assault ships are essentially miniature aircraft carriers. Most also contain amphibious landing craft, such as hovercraft, stored inside their well decks and are staging platforms for shore assaults.

Because amphibious assault ships can carry the Lockheed Martin F-35 Lightning II stealth fighter the US Navy (USN) is exploring ways to use the smaller ships as strike platforms. The USMC has experimented with a “Lightning Carrier” concept where it packs America-class amphibious assault ships with more than a dozen F-35Bs. America-class ships do not have well decks with stored amphibious landing craft, but instead save space for aircraft that are to be used for aerial assaults, such as the Bell Boeing MV-22B Osprey tiltrotor.

The USN is testing the idea that, compared to bigger, nuclear-power aircraft carriers, smaller amphibious assault ships with a contingent of stealth fighters could be deployed in larger numbers on difficult-to-predict tours, tying up an adversary’s defencive forces. There are unanswered questions of how cost-effective a force of smaller aircraft carriers would be and the USN is still evaluating the concept, however.