The announcement on the eve of the Air Force Association’s Air Warfare Symposium in Orlando adds yet another platform to a growing field of competitors chasing the US military’s on-again, off-again interest in light attack aircraft.

“This is not simply an armed variant of a civilian crop-duster or a modified training aircraft. Every inch of this aircraft is designed for purpose - specifically for the kind of asymmetrical warfare that sophisticated military forces are now being asked to conduct,” says Ivor Ichikowitz, chairman of South Africa-based Paramount Group International. 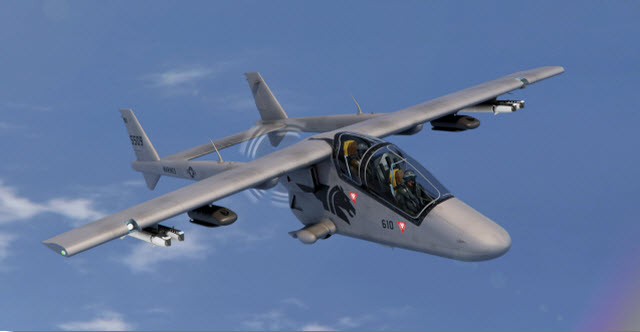 Paramount Group launched the AHRLAC in 2011 and announced earlier this month that the first production aircraft off the assembly line in Wonderboom, South Africa is close to being delivered to an undisclosed customer.

Meanwhile, Paramount has formed a US-based subsidiary and teamed up with original AHRLAC supplier Aerospace Development Corp and Virginia-based Fulcrum Concepts to form Bronco Combat Systems and offer a US-built version called the Bronco II to the US military.

As a twin-boomed two-seater optimised for slow-speed observation and light attack, the Bronco II resembles its namesake – the North American/Rockwell OV-10 Bronco. Unlike it’s Vietnam-era predecessor, the Bronco II is a single-engined aircraft with a slightly forward swept wing.

Bronco Combat Systems has started looking to create a manufacturing base for the Bronco II in the USA, the company says. Discussions are also underway with “highly respected and experienced” US suppliers for the Bronco II, Ichikowitz says.

Boeing is not identified in the announcement, but the US manufacturer has an existing partnership with Paramount. The two companies signed a broad partnership agreement in 2014, and followed that up two-years later with a deal for Boeing to develop a system to manage the sensor and weapons on the AHRLAC.

The press release announcing Bronco Combat Systems’ entrance into the US market included pictures of the Bronco II in US Marine Corps colours, but a Paramount Group official says not to read into the livery schemes in the concept artwork.

The Bronco II is likely to be pitched against a proposed US Air Force requirement for an observation/attack aircraft. Last summer, the USAF hosted a flight demonstration at Holloman AFB with three platforms – Sierra Nevada/Embraer A-29 Super Tucano and the Textron Aviation AT-6 turboprop and Scorpion twin-jet.

Earlier this month, the USAF announced a second OA-X demonstration will be held this summer at Davis-Monthan AFB, Arizona, but invited only the A-29 and the AT-6.