Airbus Helicopters chief executive Bruno Even has reiterated the need for Europe to develop a next-generation military rotorcraft and continues to court Italian rival Leonardo as a potential partner for the project.

“European customers will need a European solution,” Even told reporters during on a 26 January briefing covering the airframer’s 2020 order and delivery performance. 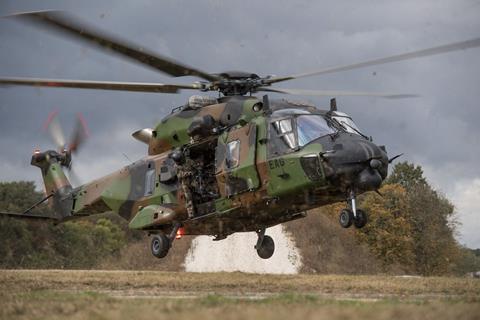 Such a project would ensure continued industrial capability and strategic autonomy for nations, he says.

Airbus Helicopters is leading an effort to secure European Defence Fund support for a programme it refers to as the European Next-Generation Rotorcraft (ENGR).

But Even stresses it is the “right time” to make decisions on “the next generation of military helicopters”, given how long it will take to mature new technologies and to “develop a new programme from scratch”.

As well as bolstering its military market share against transatlantic competitors involved in the USA’s Future Vertical Lift process, architectures matured as part of a next-generation military helicopter “will help us secure our position on the civil market tomorrow”.

Even has previously called for a joint approach with Leonardo towards Europe’s future military helicopter needs and he reiterates that Airbus Helicopters was “open and ready” for discussions with potential partners on ENGR, noting the existing relationship through the NH Industries consortium for the NH90.

Meanwhile, the airframer continues to target the UK for military sales should London clarify its approach to replacing the Royal Air Force’s Puma fleet.

Last week, Jerome Combe, head of product policy and strategy at the airframer, said that Airbus Helicopters could offer the H225M, NH90 or H175 should the 23 Puma HC2s be wirthdrawn in 2025 as currently planned.

To that list, Even adds the 6t H160M, which is being developed for the French armed forces, with deliveries beginning in 2026.

The H175 is a surprising candidate given that Airbus Helicopters has consistently ruled out developing a military variant due to restrictions agreed with its Chinese partner in the programme.

He says the company is ready to engage with the UK to better understand any future requirement and “define what could be the best solution”.

Even stresses that whatever helicopter is proposed “will be fully compliant with the export rules and controls of our different nations”.

But he points out that the airframer is also “ready and able” to extend the operational life of the Pumas beyond 2025 if required.