Airbus Defence & Space believes it has found a solution to a problem that was late last year revealed as leaving its A400M tactical transport incapable of refuelling helicopters in flight.

During a previous test campaign performed with an Airbus Helicopters H225M, both the airflow behind the Atlas and the rotorcraft’s proximity to its T-tail meant that the air-to-air refuelling activity could not be safely completed using a standard, 24.4m (80ft)-long hose. 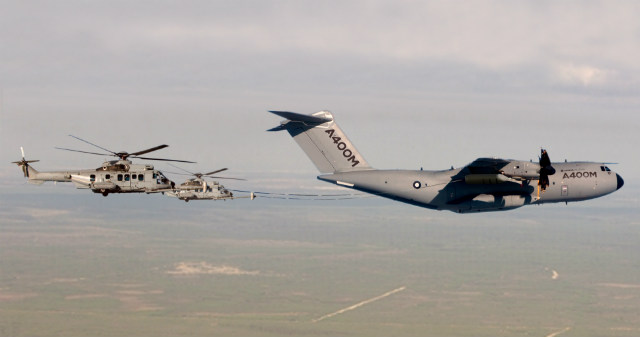 Speaking at the company’s Ottobrunn site near Munich on 20 June, head of engineering Miguel Angel Morrell said windtunnel testing of a potential solution has been conducted in Spain, with Onera. Representing the second phase of a company-funded research and development activity, this modelled using a hose-and-drogue design with a deployed length of 36.6m.

Morrell says the company will be testing a stiffer hose design than used previously, and that this will also have to be narrower in diameter, in order to fit within the same Cobham pod design. This will result in a slower fuel flow, although Airbus has yet to determine its exact effect on overall refuelling time.

Airbus says an assessment of the windtunnel test results is ongoing, and that “a flight-test programme will follow, to fully validate the results of the previous phases”. This is expected to include conducting proximity trials with an instrumented H225M before the end of this year, says Morrell.

“Hopefully this [issue] will be solved, and in the next years we will have the capability on the A400M,” Morrell says. The type is already capable of refuelling fixed-wing aircraft.

“In July we expect to do a dry contact with a C295, and with a helicopter by the end of this year,” says Morrell. Earlier flight testing has demonstrated “a very stable hose, and with no oscillations on retraction”, he adds.