APKWS hits 10-for-10 in rocket tests from Australian Tiger

Testing with the Australian Army’s 16 Aviation Brigade’s Tigers included using APKWS to convert a Forges de Zeebrugge (FZ) unguided rocket into a laser precision-guided weapon, and marked the first time airborne testing for both the Tiger and the FZ was conducted with APKWS.

The weapon scored 10 hits out of 10 during the live trials, which took place in the country’s Northern Territory near Darwin in November 2014, BAE announced on 13 April. This followed ground testing of the system at Australia’s Woomera test range in August 2014, during which APKWS hit seven for seven.

“We’re very excited about the results – to go 10-for-10 is magnificent,” Dave Harrold, precision guidance solutions product line director at BAE says. “We showed up, never having utilised that warhead and motor before, and we went 10-for-10.” 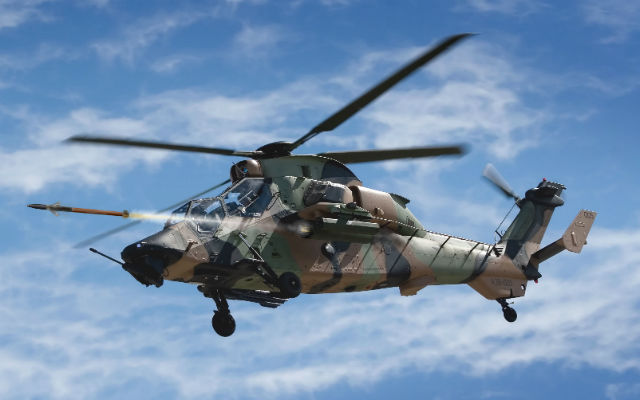 Conversations with the ADF are continuing, Harrold notes, specifically surrounding how a purchase of the weapon system would manifest.

The Royal Australian Navy has also shown interest in utilising APKWS on its Lockheed Martin/Sikorsky MH-60R helicopters, and was present during the airborne testing. A joint purchase by the army and navy could be a possibility.

Further testing is expected to take place in Australia with different types of warhead.

APKWS was originally designed to convert Hydra rockets into precision-guided weapons, and is used on some of the US Marine Corps’ rotary platforms – namely the Bell Helicopter UH-1Y Venom and AH-1W Cobra. In December 2014 BAE received a $45 million contract from the US Navy for the fourth full rate production order for 1,601 APKWS for the USMC.

Harrold is confident the US Army will be using APKWS on its Boeing AH-64 Apache helicopters “in the first half of this year”, as the acquisition of a low quantity of the system nears completion.

Once the army acquires APKWS this will put BAE in good stead with international operators of the Apache that may be interested in acquiring similar weapon systems, Harrold notes.

Demonstrations have also been carried out on fixed-wing types. Under US Central Command-funded testing, the US Air Force’s Fairchild Republic A-10 Thunderbolt and Lockheed Martin F-16, as well as the USMC’s Boeing AV-8B Harrier II, have already been tested with APKWS modified for fixed-wing aircraft.

Further testing of APKWS on the F-16 is expected in 2015, Harrold says, which would also open up export opportunities for the system.

“If we can get qualified on the US F-16 I think that will drive international interest,” he notes.

Nations that have FZ inventories could also be targeted, and demonstrating APKWS on the Tiger could open up potential conversations with France, Germany and Spain, all of which operate the type.