BAE Systems’ laser-guided rocket has been rushed into combat on the Boeing AV-8B Harrier, seven months after it was requested by the top brass of the US Marine Corps.

The semi-active-laser-seeking 70mm (2.75in) rocket, enabled by BAE’s mid-body guidance and control section, is already deployed on US Navy and Marine Corps attack helicopters and was recently acquired by the US Army for the AH-64 Apache gunship, but it will soon become a standard tool on the fixed-wing AV-8B jump jet.

US Naval Air Systems Command (NAVAIR) is delivering 80 units initially to Marine Attack Squadron-223 (VMA-223), which is currently deployed to an undisclosed location, likely somewhere in the Middle East.

NAVAIR could not say if the VMA-223 Harriers were currently engaged in combat against the Islamic State terrorist organisation in Iraq and Syria, but the quick delivery supports “combat operations”. The first fixed-wing variants were delivered to theatre this month. 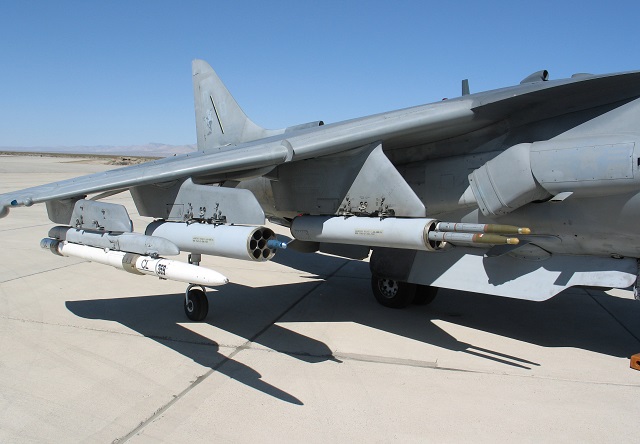 AV-8B equipped with APKWS during testing at China Lake, California

“The intent of this requirement was to quickly provide the AV-8B with a low-cost, low-collateral damage, high-precision weapon in support of combat operations,” Capt Al Mousseau, who heads NAVAIR’s munitions acquisition office PMA-242, says in a 30 March statement.

NAVAIR confirmed that a series of qualification flights took place to guarantee the rocket’s compatibility with the AV-8B platform. It was first trialed on the Harrier during a demonstration programme in 2013, BAE says, along with the US Air Force Fairchild Republic A-10 and Lockheed Martin F-16.

The second phase, after meeting the immediate warfighting need, is to make APKWS a standard weapon choice on all AV-8Bs, NAVAIR says.

Developed under the APKWS-II programme to convert the unguided Hydra 70 rocket into a precision-guided, close-air-support weapon, the navy has carried it forward as a lower cost alternative to the Lockheed AGM-114 Hellfire missile for attacking unarmoured vehicles and enemy combatants on the ground.