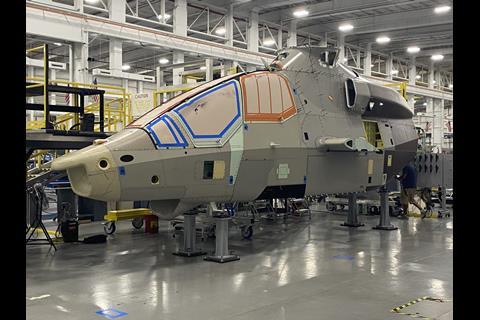 Bell 360 is being assembled on schedule, says the company 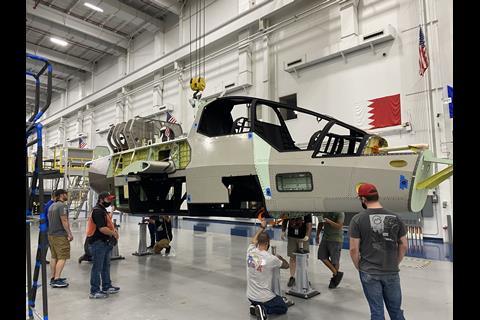 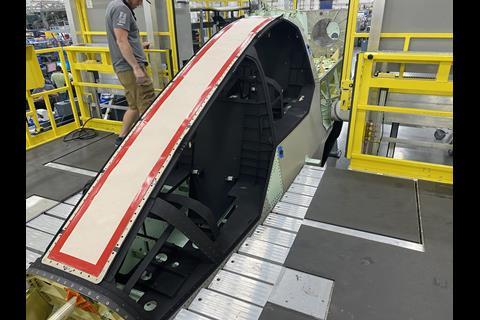 The winged helicopter is on schedule for all programme requirements, Bell said on 11 August. Assembly is underway for the 360’s fuselage, main rotor blade and gearbox, among other major components.

“We are on schedule and still targeting first flight readiness in line with the army’s schedule in fiscal year 2023,” says Grady King, Bell’s director of FARA sales and strategy.

Bell is maintaining pace despite several months ago changing the 360’s design, from a ducted tail rotor to an open tail rotor. The change was made to “maximise hover and cruise performance”, King says.

“This was accomplished as part of a holistic optimisation of performance, weight, and growth margin, and was enabled by agile digital design and manufacturing without moving our flight readiness timeline,” he says.

Bell is pitching the Invictus against Sikorsky’s Raider X, a compound co-axial helicopter with a pusher propeller. The 360’s rotor system is based on designs from the Bell 525 Relentless, a super-medium-lift commercial helicopter that is in the final stages of US Federal Aviation Administration certification.

The company claims that borrowing a conventional rotor configuration from a commercial helicopter makes the 360 “a low-risk” option for the US Army, ultimately translating into lower costs and more reliability for the service. That is an implicit dig at the Raider X’s co-axial rotor and pusher propeller system, which is more complex, but has better top-speed performance.

The US Army has said it plans a fly-off competition between the 360 and Raider X in 2023. FARA is intended as a replacement for the service’s retired fleet of Bell OH-58D Kiowa Warriors. After picking a winner in its next-generation reconnaissance aircraft competition, the service wants to field new scouting rotorcraft by 2028.