Bell plans to start autonomous flight tests of its V-280 Valor tiltrotor demonstrator in “the next couple of months.”

The company loaded the aircraft with its autonomous flight control software in the beginning of December and has been conducting pilot-controlled test flights, says Ryan Ehinger, programme manager of the V-280 Valor at Bell’s Arlington, Texas flight test facilities on 12 December. 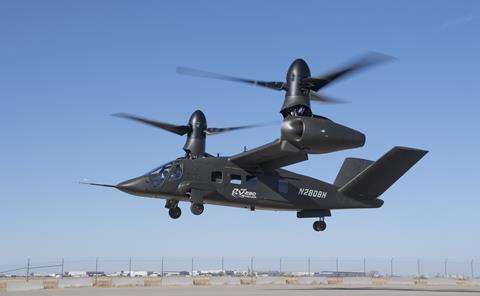 “We just loaded that software onto the aircraft and performed the initial regression testing that proves that the software is okay to fly with and we’ve been flying with it the past week,” he says. “Next steps are to do envelope expansion with that autonomous-build software, improve that capability out here over the next couple of months.”

As part of the US Army’s Joint Multi-Role Technology Demonstrator programme, the V-280 is being used by Bell to prove that its tiltrotor technology could be quickly and cost-effectively incorporated into a bid for the service’s Future Long Range Assault Aircraft (FLRAA) programme. The company says its tiltrotor has accumulated more than 150h in the air since its first flight in December 2017.

FLRAA is a competition to replace the US Army’s utility helicopter, the Sikorsky UH-60 Black Hawk. The service began asking manufacturers for conceptual designs of their next-generation aircraft in September 2019.

After Bell proves the aircraft is safe to fly manually with the autonomous software aboard, it will start autonomous flight manoeuvres, says Ehinger.

“Essentially, there’ll be a lift to a hover. There’d be a conversion [to horizontal flight]. [The aircraft will] fly around the pattern in cruise mode, and then return back and land autonomously,” he says. “We’ll have safety pilots on board.”

The company is also testing how pilots interact with the V-280’s autonomous flight controls in its systems integrations lab, trying to smooth the transition between automated flight and manual control, as well as looking for potential bugs that would cause errant manoeuvres.

“We’ve flown with control laws on this aircraft that have allowed us to demonstrate the [key performance parameters],” he says. “We are also introducing as part of this autonomy build additional features to those control laws – hover hold, position hold, altitude hold, attitude hold – those types of capabilities that will reduce pilot workload and also enabled that autonomous flight capability.”