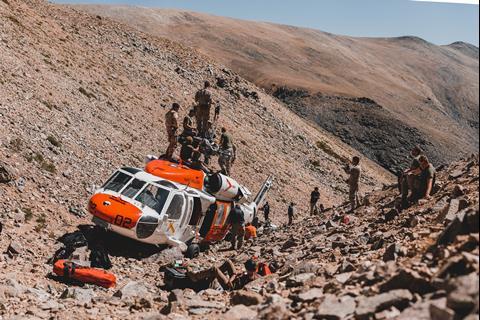 MH-60S Knighthawk helicopter being partially disassembled during a recovery mission 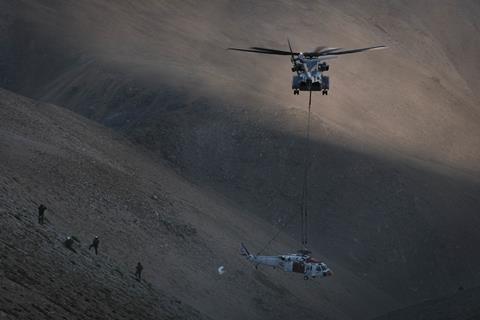 CH-53K King Stallion can sling load a variety of payloads, including artillery and ground vehicles 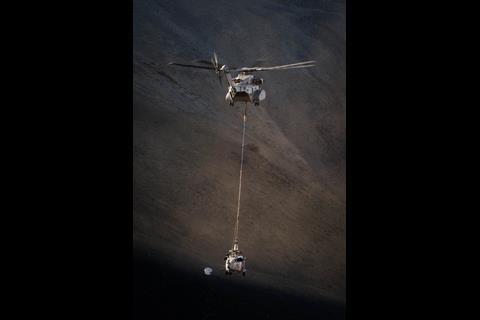 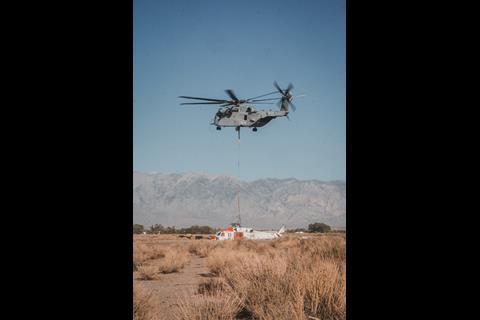 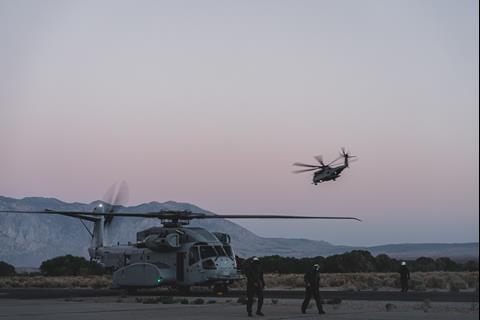 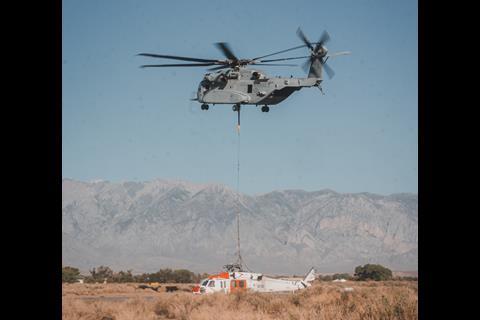 The two-day operation was the “first official fleet mission” for the helicopter, which is undergoing initial operational test and evaluation about 239nm (443km) south at Marine Corps Air Ground Combat Centre in Twentynine Palms, California, the USMC said on 9 September.

The US Navy (USN) MH-60S suffered a hard landing on rugged ground near Mount Hogue, California in July during a search and rescue mission for a lost hiker. The helicopter’s four crew were rescued the following day without injury.

Other nearby USN, USMC and US Army helicopters lacked sufficient lift to remove the 6,895kg (15,200lb) MH-60S without the helicopter being extensively disassembled first, says the USMC. The CH-53K can lift loads up to 12,250kg over a mission radius of 110nm.

The location of the downed helicopter – at an elevation of 3,657m (12,000ft) – also was challenging. The CH-53K is designed to maintain performance in high-altitude and hot environments, conditions that often degrade a helicopter’s flight capabilities. Those “high and hot” abilities are partially a response to challenging conditions faced by the USMC in the rugged mountains of Afghanistan.

The King Stallion gets its lifting capacity from three GE Aviation T408 turboshafts, rated at 7,500shp (5,520kW) each. The USMC says the high-altitude recovery mission, a 23nm airlift from Mount Hogue to Eastern Sierra regional airport in Bishop, California, was a good demonstration of the helicopter’s abilities.

“This is exactly what the K is made to do,” says Lieutenant Colonel Luke Frank, CH-53K detachment officer with Marine Operational Test and Evaluation Squadron One. “Heavy lift is a unique and invaluable mission for the Marine Corps. Horsepower is our weapon system and the CH-53K is armed to the teeth.”

The CH-53K is to replace the USMC’s ageing CH-53E Super Stallion as a transport for troops and heavy equipment, such as artillery or light-armoured vehicles, during amphibious assaults. It is intended to operate from aircraft carriers and amphibious assault ships.

The service has a 200-aircraft programme of record for the CH-53K. However, the USMC indicated in 2020 it may buy one-third fewer examples, freeing money for other priorities like anti-ship missiles.

Israel was cleared by the US Department of State in July to become the first international customer of the CH-53K, with approval given for the country to buy 18 examples of the helicopter.