The prototype, which will run in an augmented reality headset, is the latest attempt by DARPA and the US Army to automate piloting helicopters. The US Department of Defense has previously focused on using automation to free pilots from routine tasks, part of an effort to focus on making higher-order decisions like mission planning. 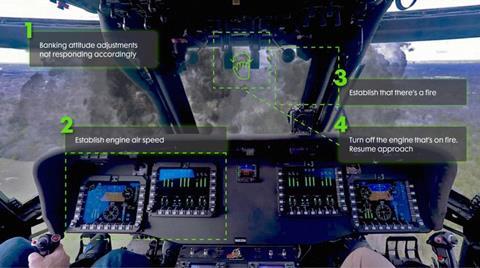 The value of the contract for the “Perceptually-enabled Task Guidance” programme was not disclosed. Northrop Grumman will, in partnership with the University of Central Florida, develop a program called the Operator and Context Adaptive Reasoning Intuitive Assistant to help UH-60 Blackhawk pilots deal with “expected and unexpected tasks”, the company says on 1 February. The AI program would be used in visual and instrumented flight to deal with a variety of issues, such as responding to an engine fire.

“The goal of this prototype is to broaden a pilot’s skillset,” says Erin Cherry, senior autonomy programme manager with Northrop Grumman. “It will help teach new tasks, aide in the recognition and reduction of errors, improve task completion time, and most importantly, help to prevent catastrophic events.”

With ever increasing numbers of flight instruments, sensors and weapons, US Army pilots’ workload has increased dramatically since the introduction of helicopters into routine operations the 1950s. In the future, the service imagines pilots will be faced with information overload.

The service is working with DARPA on a separate programme, called Aircrew Labor In-Cockpit Automation System, to automate flight control of UH-60s. It is also exploring launching and controlling small drones, called air-launched effects, from the utility helicopter.

The complexity of future rotorcraft operations has the US Army worried that pilots might become distracted or overwhelmed, potentially leading to accidents.

“Today, simple warning systems are the most common means for aiding a rotorcraft aircrew, such as auditory alerts to increase altitude. These warning systems are limiting and can induce unanticipated cognitive burdens on pilots”, says Northrop Grumman. “Studies have shown that inattentional blindness to such warnings can occur, often making them ineffective for the aircrew.”

To help keep the AI assistant in sync with its human users, the software program will use sensors, worn by the pilots, to gauge what each human perceives and knows. The types of sensors were not disclosed, though eye-tracking technologies have been used for similar purposes in the past.

“Using advanced information processing and an [augmented reality] interface, the goal of the program is to have the AI assistant provide feedback and guidance through speech and aligned graphics at the right place and time to augment the aircrew,” says Northrop Grumman.