Bell Helicopter is touting its co-developed V-22 tiltrotor for the German air force’s heavylift rotorcraft requirement, despite the programme having largely focused on only two other options to date.

While a request for proposals from Berlin is still pending, it has been widely considered that the two main contenders for the Sikorsky CH-53G replacement need are the new CH-53K and the Boeing CH-47F Chinook.

However, Richard Harris, vice-president of international military sales for Bell, told FlightGlobal at the Royal International Air Tattoo that the company is considering offering the V-22 for the requirement, and believes it has key attributes that would appeal to Germany.

One example would be the V-22 Aerial Refuelling System (VARS) that is currently under development, which Harris says could lend itself to the air force’s requirements.

While the Osprey does not have the same lift capacity as the CH-53K or Chinook, a mixed fleet of V-22s and one of these options could be considered, Harris suggests.

“We think it is [suitable],” Harris says, adding that even if the request for proposals did not exactly match the V-22’s characteristics, Bell Boeing “would still respond to it”. 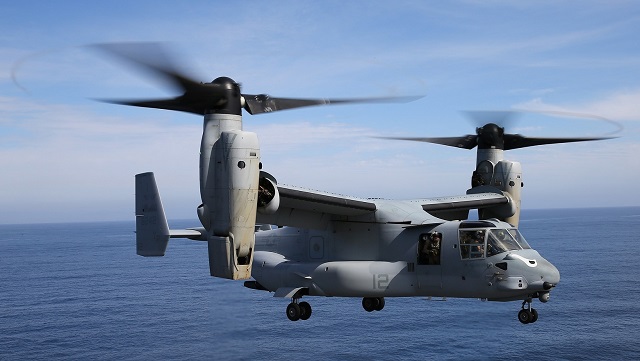 Harris says the UK Royal Navy also remains interested in the type, and that this could increase when the service introduces its Queen Elizabeth-class carriers.

“I think that is going to generate a requirement,” he says. “Unfortunately the SDSR [Strategic Defence and Security Review] did not describe a particular requirement…[but] we’re trying to keep the Royal Navy informed.”

The US Navy’s purchase of the type to carry out the carrier on-board delivery role will help keep the production line going, Harris says, and a similar role could be provided for the RN.

The UK is acquiring the Lockheed Martin F-35 Joint Strike Fighter, and the V-22 has proven its ability to carry the type’s Pratt & Whitney F135 powerplant, would could also appeal to the RN.

The Airbus Defence & Space A400M that the Royal Air Force operates has had problems finding a way to refuel rotorcraft, so Harris also thinks that the V-22 with the VARS capabilty could fill this gap.

“We have had the conversation with the RN,” he adds.

There is also traction elsewhere in Europe for the tiltrotor, both at the individual nation and NATO levels.

Countries are eyeing the Osprey for special operations, naval resupply and maritime mission support roles, but Harris acknowledges that there is a change of mindset needed to introduce the type.

“The problem we have with the V-22 is that it brings a mission that has been done by something else for some time,” he says.

Pooling the capability could be an option – just as some European nations have done with the Boeing C-17 transport – and Harris envisages five nations collectively doing this.

“A pooled training and sustainment operation would reduce the cost,” he adds. This is just at a discussion level, Harris notes, “but I know it’s supported at NATO HQ”.