The findings of investigations into the fatal crash of a Serbian air force Mil Mi-17 helicopter on 13 March have concluded that human error, bad weather and lack of compliance with operational procedure were the main causes of the accident.

The helicopter, assigned to the 204th air force brigade/890th composite helicopter squadron, was on a medevac mission near Belgrade Nikola Tesla international airport when it crashed, killing all seven people on board.

Errors by the crew have been given as the main cause of the accident, with a set of other contributory factors including bad weather conditions, inaccuracy in flight planning and a failure to comply with standard operating procedures also specified.

Making a number of recommendations, the Serbian air force commission’s report points to insufficient pilot training, inadequate or even below-standard operating procedures for helicopter emergency medical service flights, a lack of regulations for multi-crew aircraft and work pressure on the search and rescue (SAR) team members.

A lack of required flight and safety gear “as per earlier requests” – such as night vision/forward-looking infrared equipment, hoists and cranes, helmets for the Mi-8/17 crews and safety belts for flight engineers and passengers – was also identified. 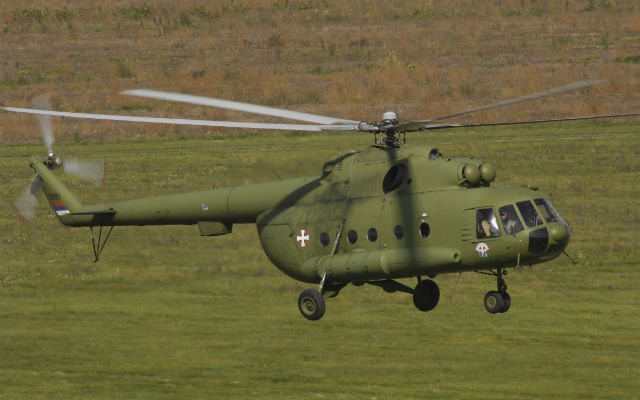 The Serbian ministry of defence says that, at 19:30 local time on 13 March, a request was received to transport a critically-ill infant from Raska in the southwest of the country to hospital. The infant apparently could not be transported by road vehicle due to rock fall.

Instead of alerting the SAR helicopter unit at Batajnica AFB in Belgrade via the MoD's operations centre and air force operations centre, the minister for defence Bratislav Gasic telephoned the wing commander directly to request urgent medical transport.

The Mi-17 managed to reach its destination despite severe weather and low cloud, flying using visual flight rules at an altitude of 6,200ft. After collecting the infant the helicopter headed back to Belgrade – but instead of landing at the AFB or military hospital in Belgrade as planned, ATC called for it to fly to the international airport where ambulances were waiting. This was apparently on the instructions of the Serbian air force operations centre, which also cited low cloud base as a reason for the change.

The pilot then missed the first approach, and on the second approach the deteriorating weather contributed to the crash.

At one point, ATC advised that the helicopter was right above the runway, but later findings showed that it was in fact 985ft off threshold and 460ft above ground level. ATC failed to advise the crew that it was actually higher than cloud base and, when a climb was requested, the aircraft lost its orientation and crashed into the ground at an airspeed of 220km/h, with the nose gear and cockpit being the first points of impact.

Serbian media has speculated that the crew was pressed to fly the helicopter to Belgrade by the minister of health, who intended to use the rescue mission as a publicity opportunity. The minister has subsequently confirmed that he was at the airport waiting for helicopter.

The air force now only has one Mi-17 remaining in its inventory, along with a handful of older Mi-8Ts.