Two former SpaceX engineers are proposing a two-stage electric vertical take-off and landing (eVTOL) aircraft for regional cargo and passenger flight, as well as for US military missions.

The eVTOL system is similar in some ways to the two-stage Falcon 9 rocket, which lands its booster stage back on earth after launching its second stage and payload high into the atmosphere, says Talyn Air chief executive Jamie Gull. Talyn Air was co-founded by Gull and chief technology officer Evan Mucasey, both of whom worked as engineers on the SpaceX Falcon 9 rocket programme. 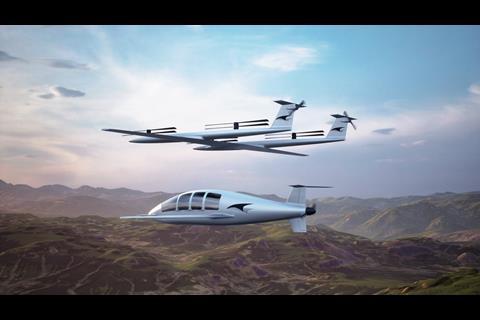 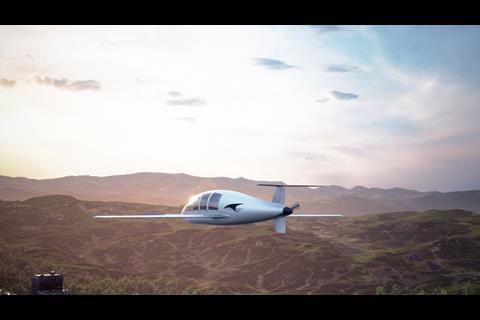 Talyn Air cruise vehicle flying under its own power 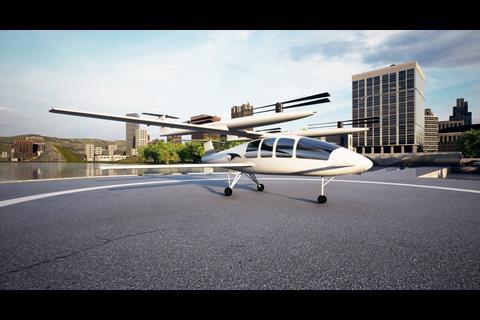 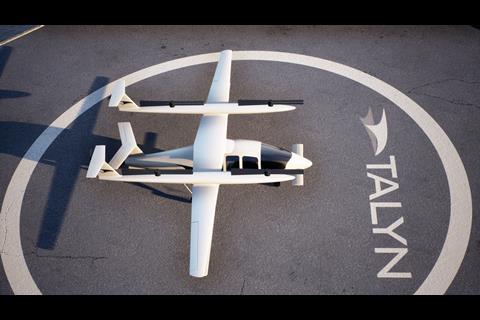 Talyn Air’s eVTOL system is made of a lift vehicle and a cruise vehicle that are connected for take-off and landing.

“The system takes off together vertically; transitions to forward flight; the two vehicles separate; the VTOL portion returns to the take-off pad; and then, the aircraft flies long distance,” says Gull. “It’s an electric aircraft at that point: very efficient, very aerodynamic, lower mass, so it can go much further. It will then do a mid-air docking with another VTOL vehicle at the destination, transition to vertical flight and do a landing.”

By having two vehicle stages, optimised for two separate stages of flight, Talyn believes it can gain extra performance. Drag and weight are reduced because the aircraft does not have to carry VTOL rotors.

The company argues that the system would be more cost effective than the eVTOL designs currently proposed, many of which are tiltrotor configurations. And, Talyn Air says its configuration is especially efficient when operated as part of a larger fleet.

“The reason it’s cheaper is because you’re not wasting the energy dragging those VTOL rotors through the air. You do have the extra [lift] vehicles. However, when you’re flying back and forth regularly, you are turning those into tugboats,” says Gull. “It’s a highly utilised asset at each end, rather than mostly the expensive part, which is the VTOL part, being unused and dragged around, wasting energy. So as soon as you have a route that you’re flying regularly, it’s actually cheaper to operate.”

Talyn Air says the two-stage system ought to also have advantages over proposed electric short take-off and landing (STOL) vehicles.

“Not needing a runway as the primary [advantage]. Even a STOL runway is pretty significant, especially with the glide slope required for take-off and landing,” says Gull. “The other is you can optimise your aircraft fully around cruise flight still, rather than having that super slow take-off or landing, which requires a high [lift coefficient], even with a blown wing.”

Outside of the booster rocket example, Gull acknowledges there is not much of a track record of this sort of two-stage aircraft. He notes the US Air Force’s (USAF’s) Fighter Conveyor programme, a 1950s effort to have a Convair B-36 Peacemaker bomber carry and launch a Republic RF-84K Thunderflash fighter. Virgin Galactic’s SpaceShipOne and SpaceShipTwo also have some similarities, he says. The other obvious example is the US Defense Advanced Research Projects Agency (DARPA) X-61A Gremlins programme, which aims to launch and recover drones from the back of a Lockheed Martin C-130 transport.

Gull declines to comment on how the hitching mechanism of the Talyn Air lift vehicle works. “It’s something we’re working on right now over the long term,” he says. “But we definitely intend this system to be just as reliable as landing an aircraft on a runway in weather. It’s something that will develop over time.”

The company says its conceptual regional eVTOL aircraft ought to have three times the range of similar vehicles, or about a 304nm (563km) reach. It should be able to carry 454kg (1,000lb) at 178kt (330km/h). Initially, Talyn Air is aiming to have its two-stage eVTOL used as a commercial cargo transport.

Talyn Air has raised $1.5 million in seed funding from venture capital firm Pay It Forward, accelerator Y Combinator and a number of undisclosed angel investors. The company has five employees and is based in Los Angeles.

The start-up has also secured a Small Business Innovation Research (SBIR) contract from the US Navy (USN) and another from the USAF to further develop its technology and produce technical demonstrators.

The phase one SBIR contract with the USN ends in about a month and Talyn Air is currently working on demonstrating a subscale example of its system to the service. Gull says the start-up has been successfully flying subscale prototypes for six months, but declines to provide other details.

“We’re essentially adding new mission capability to their fleets,” says Gull of the USN. “This would be adding VTOL capability to existing fixed-wing platforms.”

The company’s phase two SBIR contract with the USAF is part of the service’s Agility Prime eVTOL development programme and is also a technology demonstration effort. The work is scheduled to end in the summer of 2022.

“They’re just looking at eVTOL in general, and how it may help them in [transporting] cargo, passengers, logistics, flexibility on energy use. It’s kind of across the board,” says Gull.

While the company’s commercial eVTOL system concept is entirely electric, its work for the US military might include “different permutations”, possibly including a jet turbine or hybrid configuration, says Gull.

Referencing retrofitting manned or unmanned aircraft, as part of the USN contract, with the lift vehicle system, Gull says Talyn Air aims to focus on unmanned fixed-winged platforms “to start”. He declines to comment about the feasibility of adding the system to other manned aircraft, such as a fighter. However, a lifting vehicle might be able to lift a “10- to 20-seat aircraft” for regional flight, Gull said in an interview on the “Founder Friday” podcast, posted on 12 March.

If a lifting system could be added to an aircraft with a significant take-off weight, especially a combat aircraft, it would upend the USAF’s and USN’s reliance on runways and aircraft carriers, which are seen as vulnerable to attack by long-range ballistic and cruise missiles from China and Russia. Being able to launch a fighter from a footprint of a basketball court would allow a fleet of combat aircraft to hide in discrete and dispersed locations. Or, such a system could help launch aircraft from small ships.

Those possibilities aside, Talyn Air will have to prove its lifting vehicle can safely dock and release its cruise vehicle. Then it will have to demonstrate safe recovery. Thus far, DARPA’s Gremlins programme has failed to catch and recover its X-61 UAV from the back of a C-130, despite nine attempts in a demonstration in October.