After expectations soared in 2018, industry participants in the eVTOL market face self-imposed deadlines, technical hurdles and regulatory challenges, among other obstacles.

Much of the industry is being led by ridesharing app Uber’s Elevate initiative, launched in May 2018, which call for its aircraft manufacturing partners to launch eVTOL flight demonstrations in 2020 and commercial trips by 2023. However, with that deadline fast-approaching most aircraft developers are still in the early stages of vehicle development and flight testing.

“What we have to watch out for is the hype cycle,” said Mike Hirschberg of executive director of the Vertical Flight Society, at the HAI HELI-EXPO 2019 in Atlanta, Georgia on 4 March.

Hirschberg is bullish on eVTOL in the long term, but notes that in the short term the industry faces hurdles. The industry is at the “peak of inflated expectations” right now and will soon be sliding to the “trough of disillusionment,” he says, referencing the Gartner Hype Cycle for Emerging Technologies, a line chart that shows the roller coaster ride that new technologies often go through before becoming successful. 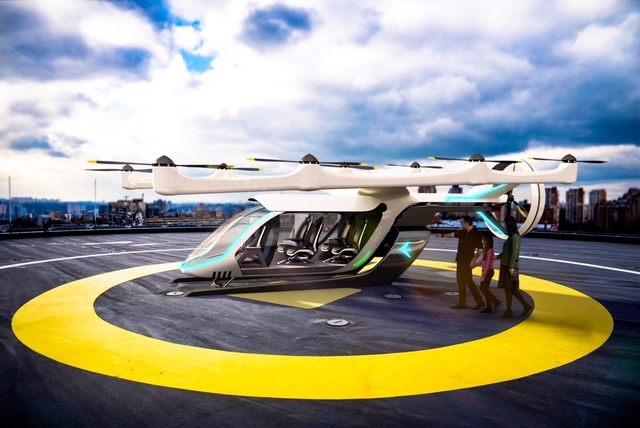 The largest hurdle to the adoption of eVTOLs is battery performance, according to Hirschberg.

“Conventional lithium-ion batteries they don’t have enough juice to really do it,” Hirschberg says. “You know, batteries suck. They have very low energy density. They have 1/20, 1/50 of what a liquid fuel has in comparison, based on weight.”

In the short-term, eVTOL developers might have more success with hybrid engines, he suggested.

In total, Hirschberg says he sees five “miracles” that need to happen for eVTOL to be deemed a success by the public’s and Uber’s current expectations. Industry participants need to meet their timeline, create new regulations with the Federal Aviation Administration, engineer infrastructure such as sky ports and air traffic management software, find or train a sufficient number of pilots, and improve battery technology.

Developing the eVTOL market isn’t impossible, but would be made much easier if one of those five miracles were solved or a way was found to relax some standards, such as extending the self-imposed deadline by a decade, Hirschberg says.

“If you gave up on any of those, flying wouldn’t be so hard,” he says. “The problem is doing all five of these together.”