MD Helicopters is developing a wing-equipped variant of its tail rotorless, twin-engined MD902 Explorer to help it meet the speed requirements of the US Army’s Future Attack Reconnaissance Aircraft (FARA) programme.

As a first step, the company is aiming to gain Federal Aviation Administration type certification for the Genesys Aerosystems glass cockpit in the militarised MD902 variant - the MD969 Combat Explorer - by year-end.

That helicopter’s systems, including its NOTAR anti-torque system, will serve as a partial test-bed for many of the concepts the company wants to incorporate on its new Swift rotorcraft.

The company wants to have a prototype Swift built by the end of the year, with ground and flight testing to begin quickly in the months after, said MD Helicopters chief executive Lynn Tilton at the HAI Heli-Expo conference in Atlanta, Georgia. The manufacturer believes that the aircraft will be capable of flying at 205kt (380km/h) or more.

“We are just starting to build the prototype and we will be doing a lot of the testing this year on this aircraft,” says Tilton.

The aircraft will use the winning powerplant from the US Army’s Improved Turbine Engine Programme (ITEP). That is currently the GE Aviation T901-GE-900, although is subject to challenge. The Swift will have an airframe that is made entirely of composite material. 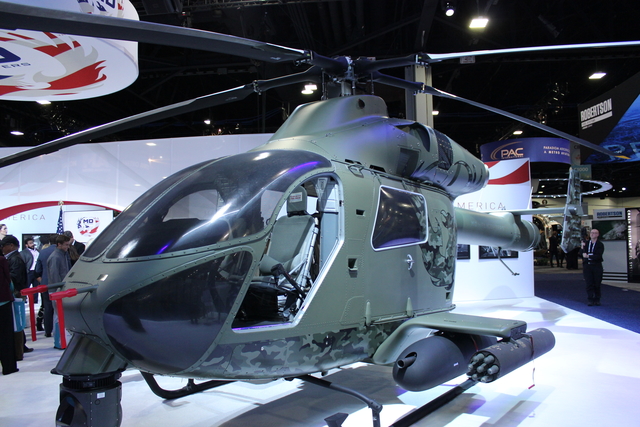 The company’s NOTAR system, which uses jet fan thrust to prevent torque rotation, will also be redesigned with a much larger fan and a new thruster, says Tilton.

“If you put your head into that NOTAR, the blades take up most of the airspace, so the amount of air that comes through is limited and that’s what limits the speed,” said Tilton. “So, it’s a whole new design of thinner, smaller blades, as well as the change of the thruster.”

Tilton says the wing will have control surfaces and will not just be a weapons pylon, but will provide substantial lift.

“You are really built to rise up as a helicopter and fly as an airplane,” she says. “You really can’t get to 205kt if you are flying as a helicopter. If you look at the [Sikorsky S-97] Raider, if you look at anything that’s coming out, they’re really partial helicopters, partial airplanes. You just have to fly that way.”

Meanwhile, MD Helicopters’ other military helicopter development project, the MD6XX, has been indefinitely suspended as the company focuses all its efforts on the MD969 and Swift, says Tilton.

“Given that FARA came forward, we needed to do something to meet FARA and the 6XX would not have done that,” she says. “We’ve actually hired a team that is only going to work on this so people don’t get distracted by production aircraft which is what happened last year.”

For its part, the MD969 is instrument flight rules certified, and can carry two crew and six passengers. It is being pitched as useful for a broad range of military, paramilitary and utility missions, including fast attack, combat search and rescue, medical evacuation, command and control, and personnel transport.