Hindustan Aeronautics (HAL) has commenced deliveries of the Dhruv MkIII helicopter to the Indian navy and coast guard.

The Indian state-owned airframer delivered three helicopters to the navy and two to the coast guard at the Aero India show taking place in Bengaluru. 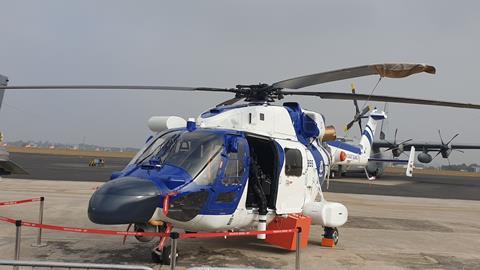 These deliveries mark the induction of the maritime variant of the Dhruv MkIII into both services.

“We originally planned to deliver 10 Dhruv MkIII helicopters each to the navy and coast guard by 31 March, but deliveries were impacted due to the [Covid-19] pandemic,” says S Anbuvelan, chief executive of HAL’s Helicopter Complex.

HAL now aims to deliver four more helicopters to the navy and three to the coast guard by 31 March.

Anbuvelan says that despite coronavirus pandemic-related delays, HAL aims to complete delivery of the 16 helicopters ordered by each service by September 2021, as originally contracted.

This is the first time that these systems are being integrated onto Dhruv. HAL had earlier integrated a chin-mounted Nexter THL20 turret on the Dhruv MkIV ‘Rudra’ armed variant.

In addition to filling the March 2017 orders for 16 helicopters from the coast guard and navy, HAL has delivered all 22 Dhruv MkIII utility helicopters from an August 2017 order from the Indian army. The delivery of 18 armed Rudra variants to army is still underway.

HAL has a total of 60 additional orders for the Dhruv from the army, air force, navy, and coast guard.