5
Heavy-twin helicopters are dragged down by offshore slump
Helicopters

Heavy-twin helicopters are dragged down by offshore slump

Formerly a leading light of the heavy-twin segment, Airbus Helicopters’ Super Puma family is slowly forging a future beyond its former core key oil and gas market, but the H225 is likely to remain locked out of that segment for the foreseeable future. Although the manufacturer is confident that it has solved the underlying safety problem related to the H225’s gearbox – the cause of a fatal crash in 2017 – the helicopter would have a significant reputational hurdle to overcome were it to be re-introduced for offshore transportation.

Equally, the ongoing weakness in the oil and gas market has meant that operators in that sector have not required the additional capacity the Super Puma would provide. With this market effectively closed off, Airbus Helicopters has instead been forced to cultivate alternative sales prospects for the type.

While there have been a number of successes for the military variant, the manufacturer has also gained traction with the H225 for search and rescue and disaster recovery operations. Additionally, the airframer’s repurposing of ex-oil and gas-roled assets to utility helicopters continues as it works through a large amount of stored inventory. The Super Puma family currently comprises two models, the 11t H225 and the 8.6t H215; both are powered by variants of the Safran Helicopter Engines Makila turboshaft. 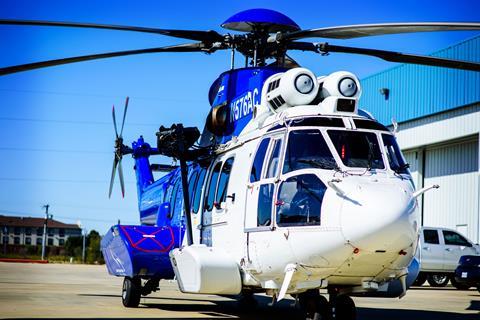 The great beneficiary of the H225’s absence from the oil and gas market has been the Sikorsky S-92. Although this dominance in the heavy-twin space has not translated into a sales increase – the sector is sufficiently depressed that no additional capacity has been required – what it has meant is an increased focus on the performance that the GE Aviation CT7-powered twin can offer.

With a maximum take-off weight of 12,000kg, the S-92 can carry a full load of 19 passengers in its offshore guise. However, that 12t figure can be increased to 12,250kg with the US manufacturer’s S-92A+ upgrade kit, which also includes a new main gearbox with increased run-dry capability.

Sikorsky has secured a launch order for the A+ modification kit, with Canada’s VIH Aviation Group signing a four-unit agreement for the fleet of its operating business Cougar Helicopters. In addition to the upgrade kit, Sikorsky is also incorporating the modifications into new-build S-92 helicopters as the B-model variant. In addition to the MTOW increase and new gearbox, the more powerful CT7-8A6 engine is also available, alongside avionics improvements. Sikorsky anticipates the S-92A+ kit will be delivered by 2023 and the S-92B helicopter in 2025.

Cougar is launch customer for S-92A+

Russian Helicopters has quietly launched a new variant of its long-running Mil Mi-171 heavy-twin aimed squarely at the offshore oil and gas market. However, key details remain vague: aside from a handful of characteristics such as maximum take-off weight and range, the manufacturer is has so far stayed silent on much of the Mi-171A3’s specification and any differences over the current A2 model.

Indeed, the airframer says that digital renderings released by parent company Rostec do not entirely reflect the final configuration of the helicopter. But there are some clear changes over the A2: although MTOW remains at 13t, range climbs by 108nm (200km), to 540nm, and passenger capacity rises from 20 to 24. In addition, the helicopter will be fully compliant with international oil and gas transport standards.

Automation has been also been added including for take-offs and landings. However, the identity of the engine or avionics suppliers have not been released; twin Klimov VK-2500PS-03 engines power the current variant. While it is hard to accurately discern from the digital renderings, the A3 appears to retain the Mi-171’s five-blade main rotor and X-shaped tail rotor. But it is unclear if the fixed landing gear of previous variants has been kept or replaced by retractable gear.

Production of an initial prototype is already under way, says the manufacturer, work on the design having commenced in 2018. First flight is pegged for 2021 – ahead of an appearance at next year’s MAKS air show in Moscow – to be followed by service entry in 2022.

Composite material appears to feature heavily in the A3’s construction: the carbonfibre nose and fuselage panels are being manufactured by Progress Arsenyev Aviation, and the cargo floor by Kazan Helicopters. Both are sister companies within the Russian Helicopters group. 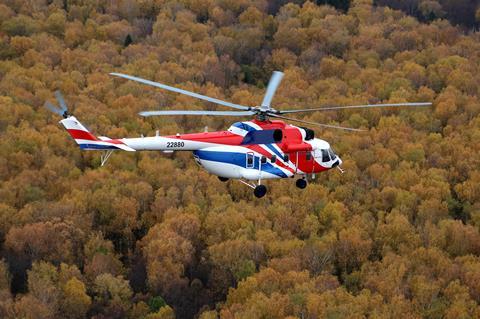 Russian Helicopters is working on a successor to the Mi-171A2

Although Russian Helicopters displayed a VIP-roled Mi-38 at the MAKS Moscow and Dubai air shows in 2019, it is also promoting the type for offshore and utility transport missions. Russian certification of the Mi-38, which is powered by twin Klimov TV7-117V engines, was obtained in December 2015. Prior to the March delivery previous examples had gone to the Russian air force. 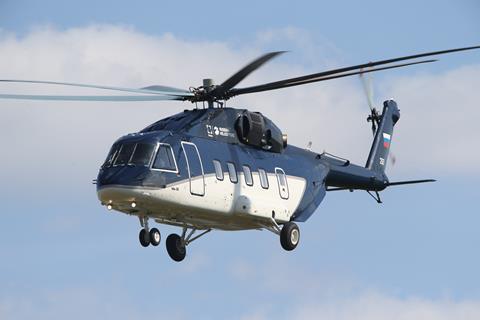 Development of the Leonardo Helicopters AW609 continues, although the coronavirus pandemic has not helped the manufacturer hasten certification. Service entry is now anticipated in 2022, with the merged Bristow/Era Group still in line to take the lead example of the Pratt & Whitney Canada PTA-powered aircraft for emergency medical services operations. Production of the first two serial AW609s is under way at the manufacturer’s Philadelphia site in the USA, with the Federal Aviation Administration the lead regulator for the programme.

Leonardo is hoping that the vertical take-off and landing performance of the tiltrotor, combined with its speed, range and ability to fly at an altitude of up to 25,000ft, will tempt buyers from a variety of segments. Indeed, the Tokyo Metropolitan Government in 2020 began evaluating the performance of the 8t-class aircraft to improve connections with Ogasawara island, which lies over 540nm (1,000km) away from the Japanese capital. 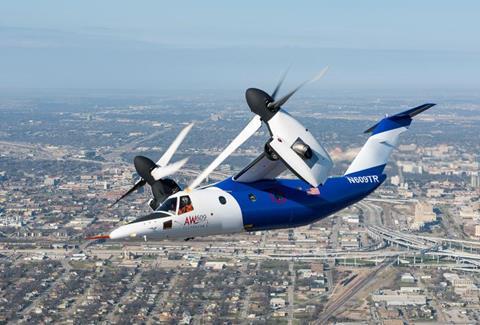 AW609 tiltrotor should enter service in 2022