Turkish Aerospace expects to fly the second prototype of its T625 Gokbey twin-engined helicopter within the next month, with the company using the IDEF exhibition in Istanbul to highlight the type's potential as a Bell UH-1 replacement for the Turkish armed forces.

A first T625 prototype was flown last September, five years after a contract was signed between Turkish Aerospace and the defence industries undersecretariat for a new indigenously designed multirole helicopter. The project represents Ankara's first attempt at designing and developing an advanced twin-engined rotorcraft without relying on a foreign partner.

Three prototypes are initially planned to be used for ground and flight testing, with serial production currently planned to commence at the end of 2021. Certification is first expected with the Turkish Directorate General of Civil Aviation, and then with the European Union Aviation Safety Authority.

"We are also communicating with the end users for different configurations," a programme official says, adding that the first configuration would be geared towards the UH-1 replacement need. Both the Turkish air force and land forces still operate sizeable fleets of the legacy type, although some of these are expected to be replaced with the locally manufactured 10t-class T70, also being produced by Turkish Aerospace.

The 6t-class T625 is currently powered by two 1,370shp (1,020kW) CTS800 engines, developed by Honeywell/Rolls-Royce partnership LHTEC, although Turkey is looking at integrating indigenous turboshaft engines in the future, likely to be the Tusas Engine Industries TEI-TS1400. "Of course, it will be based on the customers' requirement," the official says.

An indigenous engine option should be ready for when the T625's serial production commences.

Meanwhile, Turkish Aerospace says that 45 T129 ATAK attack helicopters – a locally produced development of the Leonardo Helicopters AW129 with Turkish subsystems – have now been delivered to the Turkish armed forces, from a firm total of 83 on order, plus options. An export licence is currently being processed for 30 examples on order from Pakistan, with approvals required for the model's US-sourced CTS800 engines.

"As soon as a licence is approved, which is in process right now, we will deliver immediately to Pakistan," says the official. 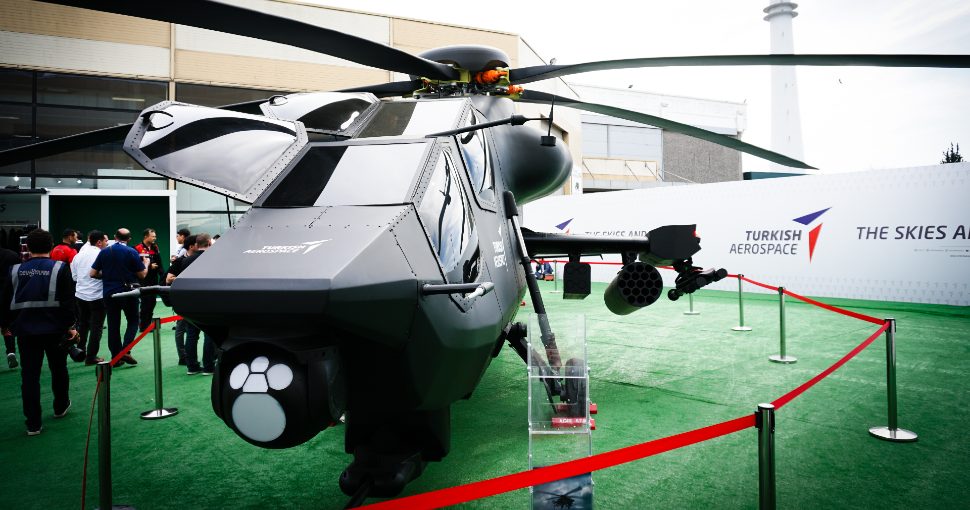 In another sign of Turkey's growing capabilities in the rotorcraft domain, Turkish Aerospace also unveiled a full-scale mock-up of the newly-announced Heavy Class Attack Helicopter (above). The company signed a contract with the defence industries undersecretariat in February for the design and development of a 10t-class rotorcraft that is likely to compete with rivals including the Boeing AH-64 Apache on the international market. A first flight of the new helicopter is expected within five years.