The three aircraft, plus a newly minted aircraft hangar, represent “one of the single largest investments that any government of Jamaica has made in the area of security”, says the country’s prime minister Andrew Holness. The aircraft are part of the recently established JDF Maritime Air and Cyber Command.

In addition to search and rescue operations and police work, the aircraft will be used to spot and stop trafficking of illegal guns and drugs, as well as illegal fishing in the country’s waters.

“What we are doing here today is ensuring that we make an investment in securing our borders, increasing our domain awareness… not just because it sounds great… but because it will have a practical effect for the man on the street in Jamaica,” says Holness. “You will see crime going down in your communities as a result of this investment.”

The marine patrol aircraft will allow the nation to extend cooperation and information sharing with other countries in the Caribbean, the JDF added. 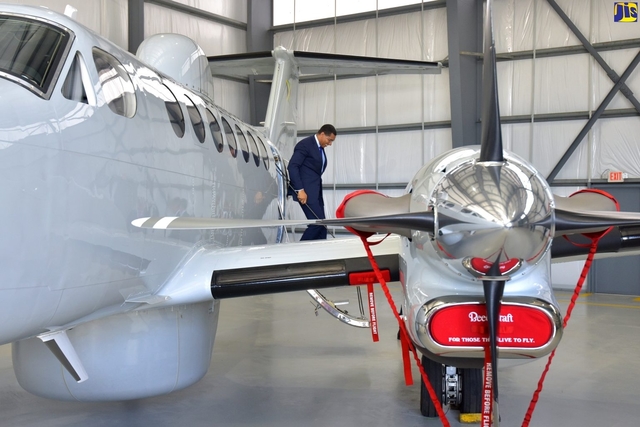 The twin-turboprop Beechcraft King Air 350 WR has been modified by Sierra Nevada Corporation with intelligence, surveillance and reconnaissance (ISR) equipment. The JDF did not disclose what sort of ISR equipment was added to the aircraft, though the country’s cabinet reportedly approved a $16.9 million payment to Sierra Nevada and the inclusion of the aircraft under the Maritime Air and Cyber Command suggests it may have electronic eavesdropping capabilities, as well as the ability to track boats hauling contraband.

Sierra Nevada says on its website that it produces a version of the Beechcraft King Air 350 called SNC Scorpion with an electro-optical and infrared sensor for recording full-motion video, a surveillance radar, and a secure voice and data communications network with line-of-sight and beyond line-of-sight capabilities.

Bell announced in August that it had handed over two Bell 429 helicopters to the Jamaican military. The company says that a third helicopter is scheduled for delivery next year