Leonardo plans to finish its first production example of the AW609 tiltrotor by the end of 2021.

The initial commercial rotorcraft is in final assembly at the manufacturer’s Philadelphia facility, the company said on 22 July. The Italian firm had previously predicted completion of the first production example in 2020. 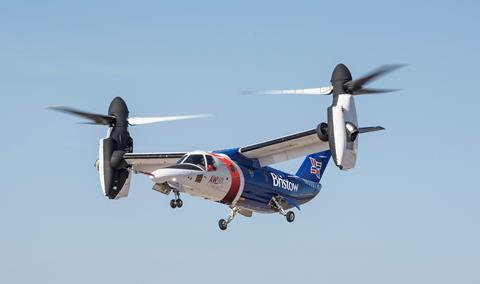 The Leonardo AW609 tiltrotor is inching toward FAA certification

Leonardo is also working to expand its Philadelphia manufacturing facility for the AW609, recently acquiring a new building that will be dedicated to the production of the aircraft. The tiltrotor is currently produced alongside other helicopter types at the company’s campus.

“We are a bit challenged on the production side in physical space,” says Bill Sunick, head of tiltrotor marketing, noting increased production of the light, single-engined AW119Kx and AW139 intermediate-twin.

Growth at Leonardo’s Philadelphia plant is partly thanks to orders from the US Department of Defense. In 2020, the US Navy (USN) named the Leonardo TH-73A (AW119Kx) as its next trainer. The service’s programme of record is for 130 aircraft. In 2018, the US Air Force (USAF) selected the Leonardo MH-139A Grey Wolf (AW139) as its next utility helicopter for nuclear ballistic missile security missions. That programme of record is for 84 helicopters.

So, in order to get some more elbow room, Leonardo is in the midst of moving AW609 manufacturing to a specialised facility that will be optimised for the tiltrotor’s production, says Sunick. Laying out a dedicated AW609 production line is also part of the aircraft’s certification process, he adds.

Leonardo declines to predict when certification of the AW609 will be finished. Previous estimates, including an expected completion date in 2019, have slipped by. “We’re refraining from giving any distinct targets on certification with the ongoing challenges of Covid and whatnot,” says Sunick.

Leonardo has three flyable examples of the AW609 involved in its US Federal Aviation Administration (FAA) certification effort. Two are located in Italy: one being primarily used for run stand testing of drive system components and another for avionics testing. A third prototype is located in Philadelphia and has been used for engine vibration and flight handling testing, among other uses, says Sunick.

Bristow Group is the launch customer for the AW609, having ordered two examples of the rotorcraft in 2015. Leonardo says Bristow’s work transporting personnel to offshore oil and gas platforms, search and rescue operations and utility helicopter services make it an ideal launch customer for demonstrating the value of the tiltrotor.

With the speed of a turboprop and the take-off and landing capabilities of a helicopter, Leonardo has argued the tiltrotor could also be used for government missions, including medical evacuation, special operations troop transport, maritime patrol and personnel extraction.

Yet, the market for tiltrotors – even amid deep-pocketed governments of the world – has been tough. The Bell Boeing V-22 Osprey is only operated by the US military – the US Marine Corps, USN and USAF – and the Japanese military, for example. Expanding sales behind those armed services has proved fruitless, despite a very public marketing campaign by the US government and the Bell Boeing team.

The United Arab Emirates air force announced in 2015 that it planned to buy three examples of the AW609 for search and rescue operations. However, Leonardo declines to comment on the status of that order – or any other potential order, for that matter.

Future orders for the AW609 aside, Leonardo is preparing to train future pilots and maintainers for the aircraft. The company opened an $80 million training academy in April that is used for teaching AW139, AW169 and AW609 pilots and maintainers. The facility has a dual-use full-motion simulator that allows for representative cockpits of the AW169 or the AW609 to be rolled on and off within several hours.

“We anticipate in the autumn of this year swapping out that [AW169 cockpit] and putting in the AW609 copy in there for the FAA to begin their certification efforts on the training device,” says Sunick.