German start-up Lilium Jet will begin flight testing in early 2017 of a prototype for an electric-powered two-seat aircraft with vertical take-off and landing capability, the company announces on 5 December.

The launch of flight test comes after Lilium Jet closed a $10.8 million round of Series A financing by venture capital firm Atomico, which was founded by Skype creator Niklas Zennström.

The flight tests of a recently completed prototype moves the Lilium Jet “towards commercial production”, the company says.

Conceived by four engineers and designers at the Technical University of Munich, the Lilium Jet proposes to meet a series of ambitious performance targets, including vertically lifting a 600kg vehicle with a 200kg payload like a helicopter, then moving forward at speeds up to 135-162kt with a 165nm range. 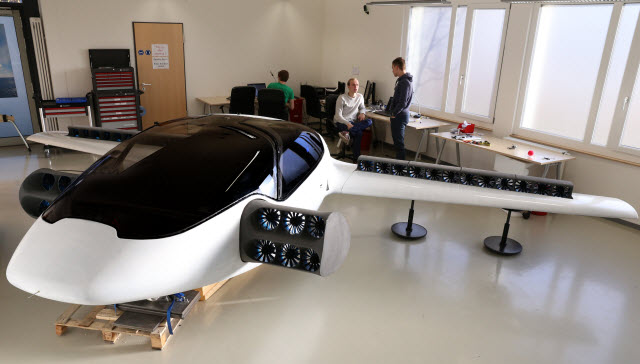 The designers selected a configuration that appears similar to the Aurora Flight Sciences Lightning Strike, another VTOL, electric-powered X-plane in development for the Defense Advanced Research Projects Agency.

Except for the addition of a two-seat cabin, the Lilium Jet uses a bank of electric-powered fans arrayed across an aft-mounted, tilting wing, assisted by canard surfaces embedded with fans that rotate from vertical to horizontal flight modes.

The Lilium Jet prototype was developed following a series of flight tests using scaled models, including the 1:5 scale Hexa and Dragon and the 1:2 scale Falcon, according to the company’s web site.

“As a pilot you won’t have to worry about controlling the flaps. You simply push the throttle stick forward and the on-board computer controls all engines and flaps,” the company’s web site explains.

A software-based flight envelope protection system is added to reject unsafe pilot commands. If recovery is not an option, the Lilium Jet will be equipped with a whole aircraft parachute.