After a service life spanning 51 years and more than 450,000 flight hours, the Royal Netherlands Air Force will retire its last four Aérospatiale SA316 Alouette III helicopters from use on 1 January, 2016.

An official transfer from the air force's 300 Sqn to the Defence Materiel Organisation (DMO) took place at Gilze Rijen air base on 15 December. 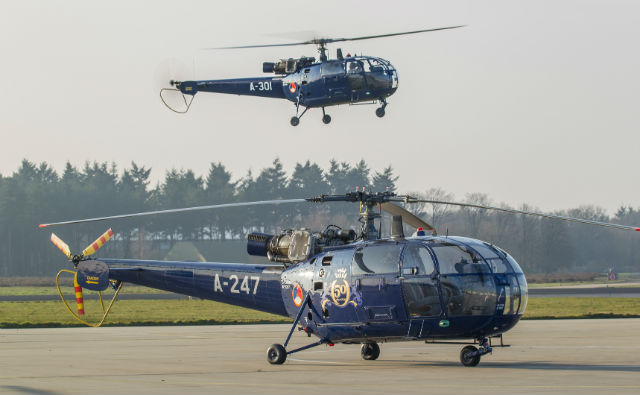 The DMO will be responsible for the sale of the surplus rotorcraft, all of which are close to their 10,000h service mark and would require a scheduled overhaul to remain in use. The cost of conducting this work was no longer deemed economical by the nation's defence ministry.

The Netherlands received its first of 77 Alouette IIIs in 1964, and employed the type in roles such as reconnaissance, liaison and medical evacuation, including during international missions in Cambodia and the former Yugoslavia. Between 1973 and 1995, four of the type were also employed by the air force's demonstration team, “The Grasshoppers”.

From the 1990s, the Royal Netherlands Air Force expanded its capability by fielding Boeing CH-47D Chinook and Eurocopter AS532 Cougar transports and Boeing AH-64 Apache attack helicopters, but retained nine Alouettes for a variety of duties. One of the fleet's highest-profile tasks was to provide VIP transport services for the Dutch Royal family.