After the US Army released its first Sikorsky UH-60V Black Hawk helicopter for service in October, an upgrade of the older “L” variant, key components supplier Northrop Grumman is looking to expand sales of its part of the package to foreign militaries.

Northrop is the supplier of the V-upgrade package’s Integrated Avionics Suite, which replaces the UH-60L’s analogue gauges with a digital, open architecture integrated glass cockpit. The overall upgrade process is handled by the US Army in-house at Corpus Christi Army Depot in Texas. The upgrade also includes a 10-year service life extension for the airframe. 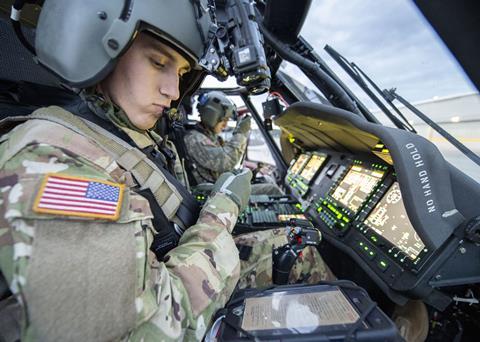 The US Army programme of record for the UH-60V upgrade programme is 760 units. So far, Northrop is on contract to supply 51 avionics kits across two low-rate initial production contracts.

Northrop is looking to expand on that business. There are about 180 examples of the UH-60L in service around the world that are likely candidates for the “Victor” upgrade, according to Cirium fleets data. Those UH-60L operators include the Brazilian air force, Colombian army, Royal Jordanian Air Force, Royal Saudi Land Forces, Royal Thai Army, South Korean air force and United Arab Emirates air force.

The sale of the upgrade package to international customers could be handled through the USA’s Foreign Military Sales process or via direct sales, says James Conroy, vice-president of navigation, targeting and survivability with Northrop.

With the US Army handling its own upgrade and rebuild process at Corpus Christi Army Depot, it is not clear who would perform work for prospective international customers.

Northrop notes that the open systems architecture of the UH-60V means new software and hardware can more easily be introduced. For example, the US Army recently decided to add the FLIR Talon MMS to the helicopter, a lightweight electro-optical/infrared surveillance camera.

The company claims the open system architecture would also allow foreign militaries to customise their UH-60Vs for local needs, while still maintaining some commonality with the US Army.

In fact, the Victor upgrade is meant to be a money-saving retrofit to bring the capabilities of the UH-60L into alignment with the latest Black Hawk, the UH-60M.

“Cockpit similarity with the UH-60M enables a single Army Black Hawk pilot training programme,” says the Pentagon’s Director Operational Test and Evaluation (DOT&E) office in its 2019 annual report. “Once qualified on the UH-60M, pilots can transition to the UH-60V with minimal additional instruction.”