The two-week Unmanned Warrior exercise is allowing industry to pitch its products to the navy and is expected to result in a number of contract awards for different capabilities.

Unmanned Warrior has been some years in the making, having first been thought up by then-First Sea Lord Adm George Zambellas, under whose command a number of initiatives in this area were introduced.

The only unmanned air vehicle that the service currently operates is the Insitu ScanEagle, which is deployed on a contract basis on vessels to carry out surveillance. After a number of contract extensions, the RN has decided not to continue operating the UAV past 2017, and is using Unmanned Warrior to assess which system it will acquire to fill that gap.

The newer version of ScanEagle – which includes a multi-intelligence payload capability – will be demonstrated by Insitu during the exercise, and an Orbital heavy-fuel engine that is being introduced into the system could appeal to the service.

Another high-profile experimentation with unmanned technology by the RN in recent years was a capability concept demonstration (CCD) of the Leonardo Helicopters SW-4 Solo optionally piloted vehicle in 2015. The CCD clearly piqued the navy’s interest in ship-based rotary UAV operations, and one of the key demonstrations during Unmanned Warrior will be by the Solo, which has carried out some 100h of tests to date. 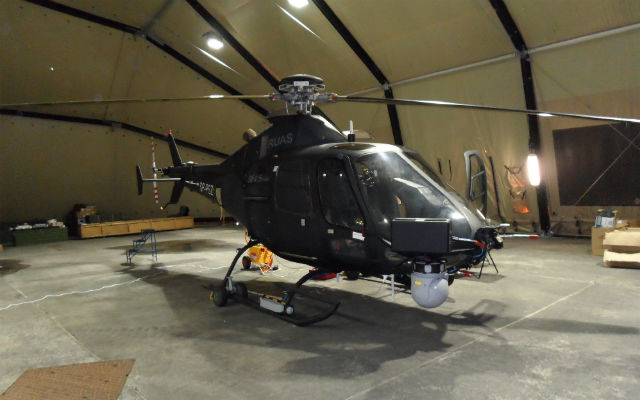 Fitted with a single-panel example of the company’s new Osprey 30 flat-panel active electronically scanned array radar, plus the SkyISTAR mission system and Sage electronic support measures equipment, Solo is expected to fly twice per day during the exercise, totalling 40h of flight time.

The first week of the activity will be largely scripted, and involve the helicopter searching for targets determined by the navy. This will be controlled from a BAE Systems combat mission system tailored to resemble the control station of a frigate, and will include navy personnel disseminating and analysing the data being received from the aircraft.

The second week is less planned, and will allow for more flexibility. The air element of testing will largely be based from Benbecula, off the west coast of Scotland.

During the previous CCD, Leonardo’s PicoSAR synthetic aperture radar was used, so this will be the first demonstration of the Osprey – and Sage – on the Solo. Flying at 6,000ft, the vertical take-off and landing SW-4 will use its payload to show how the mix of systems can increase situational awareness for the operator, with some of the sensors to be operated by navy personnel throughout.

“For what we’re doing, the aircraft is perfect,” Rick Wellesley, UK government business lead for Leonardo Helicopters, tells FlightGlobal. “It helped inform MoD thinking under their CCD that we led as an industry team." He adds: [The sensor configuration] is representative of what could be applied to a small VTOL UAV.” 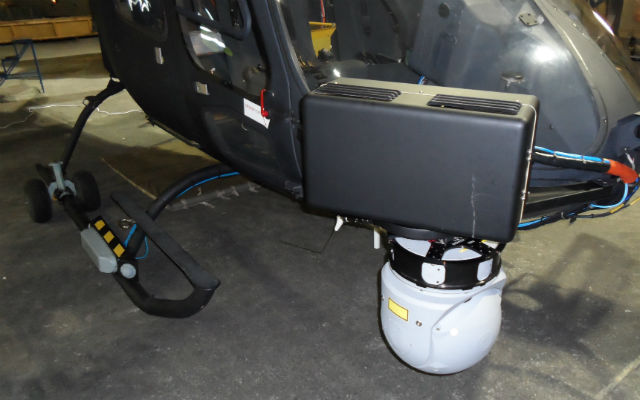 There will be multiple international observers of the exercise, which could help generate further interest in the Solo. To date, there have only been a limited number of demonstrations carried out, but Unmanned Warrior should help promote the capability further, Leonardo says.

“When we look at where capability is going, there is a real drive towards unmanned systems in the maritime,” Wellesley notes.

In the footsteps of the US Navy, which operates a mix of Northrop Grumman MQ-8 Fire Scout UAVs and Lockheed Martin MH-60R manned helicopters from its vessels, Australia, Canada and New Zealand are all assessing the future mix of their fleets.

New ship acquisitions will also drive navies to think about what new capabilities can be operated, Wellesley notes, particularly at high sea states and in adverse conditions, where an unmanned option would be safer.

According to MoD documentation released earlier this year, a second CCD phase is expected to be carried out using the Solo, although Leonardo declines to comment.

Leonardo’s Sage ESM system will also be operated during the exercise aboard a Schiebel Camcopter: a smaller rotary-wing UAV.

Sage is a radar warning receiver that provides analysis of radio frequency signals. It collects emitter data from radar frequency sources and compares them with an emitter library to identify threats and geolocate them. The equipment has previously been tested on the Camcopter as part of a pitch to the Royal Australian Navy.

The Osprey radar, meanwhile, has been selected by the US Navy for use on its Bell Helicopter 407-based MQ-8C UAV, and is also used on Norwegian Leonardo AW101 search and rescue rotorcraft.