Video released by the joint Sikorsky-Boeing team on 17 January helped quell questions about the development and test helicopter’s status, which has been in doubt since gearbox troubles put it behind schedule. Additional uncertainty arose when the US Army announced in 2019 that it stopped funding its Joint Multi-Role Technology Demonstration (JMR-TD) programme. The SB-1 was developed through the US Army’s Future Vertical Lift programme, of which JMR-TD was one portion. 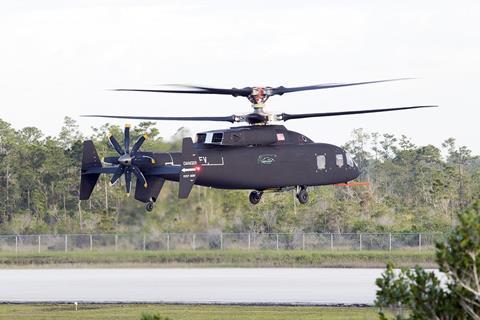 The SB-1’s chief competitor, the Bell V-280 Valor tiltrotor, had accumulated more than 150h of flight time over two years as of December 2019. Sikorsky and Boeing did not disclose how many hours the Defiant demonstrator had logged.

“The Sikorsky-Boeing SB-1 Defiant continues to expand its flight envelope through sorties each week, executing the mission elements required for Future Vertical Lift, most recently exceeding 100kt and performing maneuvers at 30° angle of bank at the Sikorsky Development Flight Test Center in West Palm Beach, Florida,” the companies say.

The Sikorsky-Boeing team said in October 2019 they planned to increase the SB-1’s speed during test flights in 40kt increments until reaching 230kt by the end of the first quarter in 2020.

At the NASA Ames Research Center, a subscale Defiant model has been successfully tested at 250kt, the companies said.

With the JMR-TD programme wrapped up, the US Army has shifted focus to its final competition to replace its workhorse Sikorsky UH-60 Black Hawk. The service began soliciting conceptual designs for its Future Long Range Assault Aircraft (FLRAA) in September 2019. It aims equip initial units with the new rotorcraft no later than 2030.