The Defiant, which is a proposed rotorcraft for the US Army’s Future Long-Range Assault Aircraft (FLRAA) programme, also reached 232kt in a descent, Sikorsky and Boeing said during a webinar on 14 October. 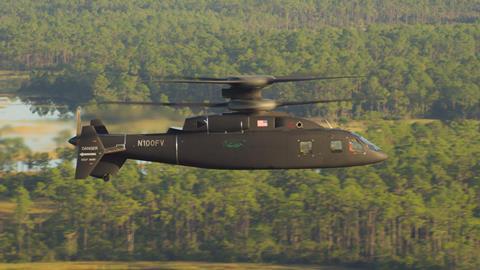 The FLRAA programme is an effort to replace the US Army’s Sikorsky UH-60 Black Hawk fleet of utility helicopters, which are often used to carry troops into battle. The service wants to equip its first unit with FLRAA no later than 2030.

The SB-1 is a compound co-axial helicopter with a pusher prop. The pusher prop can be run in reverse to slow the aircraft or disengaged via a clutch.

Previously, the fastest the helicopter was reported to have flown was 205kt, during a flight test in June. The Sikorsky-Boeing team has said it is pushing for the rotorcraft to surpass 250kt. That would be better than the US Army’s 230kt cruise speed requirement for the FLRAA programme.

The SB-1 is competing against Bell’s V-280 Valor tiltrotor, which has already reached a top speed of 300kt.

The Sikorsky-Boeing team claim that the SB-1 Defiant has an advantage over the V-280 in its ability to rapidly stop via reverse thrust from its propeller, a feature which would allow it to quickly transition from forward flight to a descent into a landing zone. For its part, Bell emphasises the V-280’s ability to fly fast and efficiently on its wing during forward flight.

Winning the FLRAA competition is hugely important to Sikorsky and Boeing. The two companies claim nearly 90% of the aircraft in the US Army’s inventory today, including the UH-60, the Boeing AH-64 Apache attack helicopter and Boeing CH-47 Chinook cargo helicopter.

The FLRAA programme is especially important to Boeing, which was eliminated from the other US Army next-generation rotorcraft competition, the Future Attack Reconnaissance Aircraft (FARA). Sikorsky’s Raider X is competing against Bell’s 360 Invictus for the FARA programme, which aims to field a next-generation helicopter to a US Army unit by 2028.