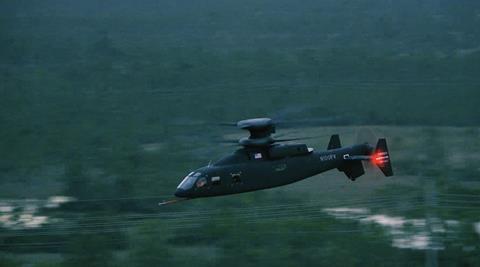 Within a few months, the Sikorsky-Boeing team is pushing for the helicopter to top 250kt – above the US Army’s 230kt cruise speed requirement for the Future Long Range Assault Aircraft (FLRAA) programme.

“We went to 205kt with less than 50% of the installed propeller power,” says Bill Fell, lead test pilot for the SB-1. “So, expect a lot more in the future because we have a lot more power to apply to this machine.”

The Sikorsky-Boeing team has logged 18h of flight time on the SB-1, as well as 20h on ground test runs on the helicopter, and 113h on a separate powertrain system test bed (PSTB).

The SB-1 is competing against Bell’s V-280 Valor tiltrotor in the US Army’s FRLAA programme. That aircraft has reached a top speed of 300kt. 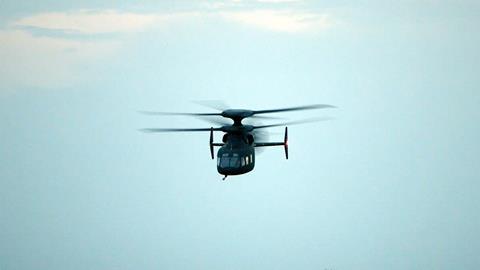 The Sikorsky-Boeing team argues that the SB-1’s advantage over the V-280 is its ability to reverse its pusher propeller and use it as an air brake to slow or quickly stop the compound helicopter. The companies also say the aircraft’s rigid main rotor system gives it more control power, making it nimbler.

Fell notes that in test flights those features have allowed the rotorcraft to perform aggressive manoeuvres.

“We did a little formation down the runway with our chase ship and I banked it over into a 45° angle bank on the treetops to turn around and come back,” he says. “I put all that negative pitch on it and it just felt natural.”

So far, most flight tests have been focused on pushing the top speed envelope, as that is likely to be more challenging than proving the rotorcraft’s manoeuvrability, the companies say. In a powered windtunnel test, the SB-1 has demonstrated the ability to fly at 250kt, so the team believe topping that speed is achievable. Flight test speeds will likely be increased by increments of 20kt per test, depending on the results of testing on the PSTB.

Speed is crucial to the US Army’s vision of a Sikorsky UH-60 Black Hawk replacement that can carry troops into battle so quickly that enemy air defences will not be able to react.

“For us, the kind of speed that matters is minimising your exposure in that integrated air-defence system threat,” says Randy Rotte, Boeing’s director of global sales and marketing for US Army Future Vertical Lift programmes.

By flying below or quickly past enemy radar, the SB-1 can minimise the opportunity for the rotorcraft to be detected, acquired, tracked and fired upon, he says.

“So you’re breaking that kill chain with a combination of speed and that manoeuvrability,” says Rotte.

To fly low and fast, Sikorsky and Boeing are working on a separate US Army programme called Advanced Flight Controls, that will automate some of the aircraft handling, for example to facilitate terrain avoidance or nap of the Earth flight. Those flight control laws are being developed and tested in a laboratory setting.

“We’ve developed enough fly-by-wire aircraft to believe there’s no reason [we can’t] just easily merge the two and test it out in flight tests,” says Fell.

As part of the ongoing, competitive demonstration and risk-reduction phase of FLRAA, the Sikorsky-Boeing team is conducting trade studies with the US Army to determine how adding or removing different features would impact the SB-1’s speed, range and payload. The aircraft is undergoing a design review currently with the service.