The helicopter has a rigid coaxial rotor system and pusher propeller and is almost identical to its demonstrator predecessor, the SB-1 Defiant. However, some small changes to the production model’s configuration are planned, Sikorsky and Boeing said in a 22 January interview. 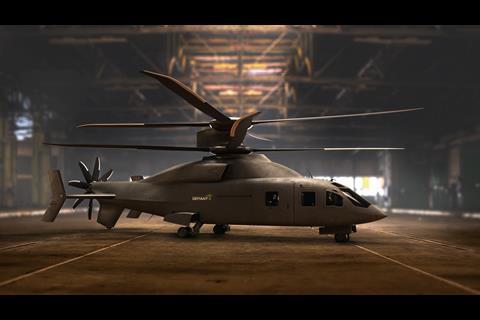 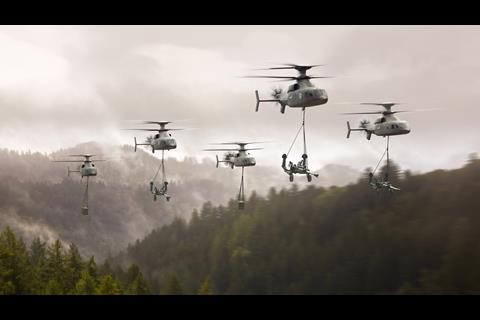 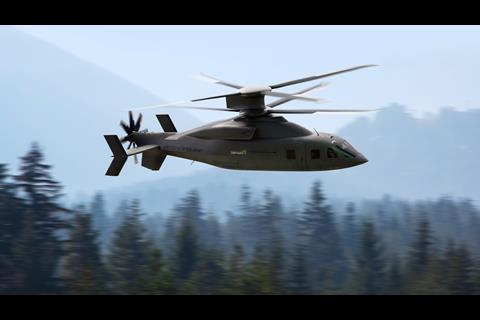 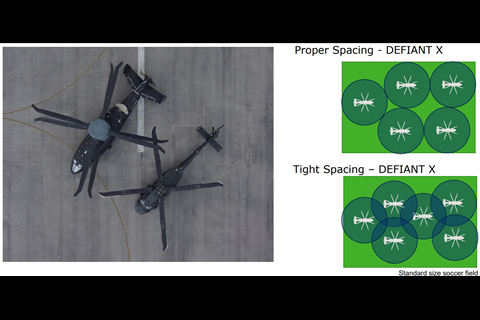 “We’ve made some changes to the landing gear for a tricycle design landing gear, which improves both stability, but then landing and taxiing in combat and austere environments,” says Heather McBryan, Boeing’s sales and marketing director of Future Vertical Lift.

The trailing edge of the vertical stabilisers on the SB-1 Defiant have also gone from straight to a V-shape. The Sikorsky-Boeing team declines to say why this was done, other than to explain it was to enhance performance.

The Defiant X is pitched by the Sikorsky-Boeing team as having “room for growth”.

”The aircraft can handle additional weight without having to grow the rotor diameter or the engine size,” says Jay Macklin, business development director for Future Vertical Lift with Sikorsky. ”So, any additional equipment, survivability features, payload, including external lift, can be handled without a significant and costly redesign of key dynamic components.”

In the distant future, if the Defiant X was outfitted with an even more powerful engine than what is planned now it could use the addition power to increase forward flight speed, Macklin says. ”We could also increase the built-in vertical flight growth margin even further, if required.”

The SB-1, and its rival the Bell V-280 Valor, have emerged as the only competitors in the FLRAA programme after several years within the US Army’s Joint Multi-Role Demonstrator effort, part of a broad risk reduction programme.

The Sikorsky-Boeing team says it has logged 135h on its SB-1 Propulsion Systems Testbed and 31 sorties on its demonstrator aircraft, amassing 26 flight hours.

Pitted against the production version of the Bell V-280, which has an advantage when it comes to maximum speed due to its tiltrotor design, the Sikorsky-Boeing team argues that the Defiant X will be better suited during the final approach phase.

That is partially due to the Defiant X’s reversible pusher propeller, which can rapidly reverse pitch and act as a sort of air brake to slow and then stop the rotorcraft in a hover. The companies also argue that the smaller rotor diameter of the co-axial helicopter, compared with the V-280, will allow it to fly in tighter formations and will enable more aircraft to fit in a landing zone.

In fact, the Defiant X fits within the same footprint as the Sikorsky UH-60 Black Hawk utility helicopter that it is intended to replace, says McBryan. That means the US Army won’t have to make many changes to accommodate the new aircraft, she says.

The Sikorsky-Boeing team expects the US Army to release a request for proposal on FLRAA later this year, with a contract award expected in 2022.

The service aims to field its first example of FLRAA no later than 2030.

Update: Article updated on 25 January with additional comments from Sikorsky