Sikorsky’s S-97 Raider has not yet flown, but the company is considering extending the aircraft’s coaxial rotor design to other platforms.

Chief executive Mick Maurer, speaking at the HAI Heli-Expo show on 3 March, says technology incorporated into the Raider, which was initially pitched as a replacement for the US Army’s Bell OH-58D Kiowa Warrior armed scout helicopter, could improve other platforms, although there are no firm plans to do so.

“The first applications that we expect for X2 are almost certainly going to be military,” Maurer says. “The reason for that is you’ve got to have a customer that buys enough of those for you to justify that big investment. The business case is very difficult to go out and speculatively do that on the commercial side.”

The Raider, which sports stiff coaxial rotors and a pusher propeller, is designed to take off, land and hover like a helicopter and fly fast and high like a fixed-wing aircraft. It is essentially in the weight and size-class as the S-76D medium class helicopter, Maurer notes. 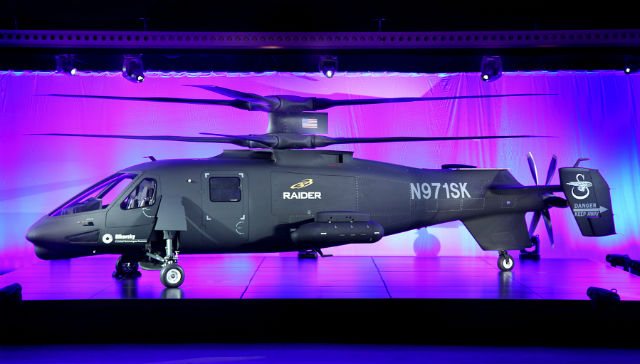 The first S-97 prototype is complete and in ground test. So far, the first Raider has had 14 engine starts and has undergone a total 3.5h of ground testing. The aircraft will be put through 50h of pre-flight acceptance testing before it flies for the first time, Maurer says. The first bladed ground runs ended after achieving 85% of full rotor speed, he says.

There is no US government programme of record or official requirement for the S-97, but Sikorsky is basing its joint-multi role demonstrator on the technology. The SB-1 Defiant is a scaled-up version of the Raider that Sikorsky hopes will be chosen to replace the US Army’s H-60 Black Hawks and Boeing AH-64 Apache helicopters.

The company also is angling for the US Navy’s MH-XX maritime helicopter programme, but Maurer says coaxial rotors are not likely to be offered for that competition.

“I don’t want to presuppose a technical solution. That’s a possibility,” he says of a coaxial rotor configuration. “The tough thing with coax and the navy is fitting in a ship hangar. They want something that can be on station for a long time. So the premium on some of the things that a coax will do, let’s say for the army, in terms of mobility, high-hot performance, the speed for the army or even the Marine Corps, that proposition is a little different for the navy.

“I wouldn’t say never, but it doesn’t feel like that’s the right application for it,” Maurer adds.