Landing multiple helicopters in a small landing zone – especially an area hidden in a cloud of dust and criss-crossed with enemy gun fire – is one of the more complicated and dangerous manoeuvres US Army pilots must be able to perform.

Now, the US Defense Advanced Research Projects Agency (DARPA) wants to see if a computer can do it for them. 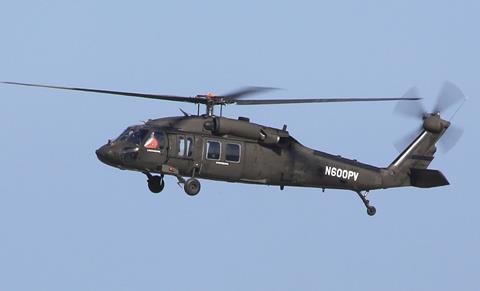 The company has yet to fly a single Black Hawk autonomously, a feat that it had anticipated doing this year, but says it is on track to accomplish that solo flight for the first time in 2021. It will then move on to the more complex multiple helicopter demonstration. Coronavirus restrictions and changing programme priorities caused the delay, the firm says.

Sikorsky owns two helicopters using ALIAS: its Sikorsky Autonomy Research Aircraft (SARA), which is a modified S-76B, and a UH-60A Black Hawk, which has had its mechanical flight controls replaced with fly-by-wire controls. For its part, the US Army is retrofitting one of its own UH-60Ms with ALIAS and expects the helicopter to be ready for autonomous flight next year. All three rotorcraft will be used in the multi-ship demonstrations.

ALIAS is intended as a possible retrofit programme for Black Hawks, including older mechanically controlled variants of the utility helicopter, such as the UH-60A, which would receive fly-by-wire control upgrades. But, Sikorsky says much of the technology is likely to also find its way onto the service’s two Future Vertical Lift programmes: Future Attack Reconnaissance Aircraft (FARA), the forthcoming replacement for the retired Bell OH-58 Kiowa scout helicopter, and Future Long-Range Assault Aircraft (FLRAA), the replacement for the UH-60 utility helicopter.

By freeing aviators from piloting work, Sikorsky believes ALIAS will allow them to focus on other tasks such as mission management. The company believes the system will not only automate helicopter piloting, but also do it faster, safer and better than humanly possible – performance that could help the aircraft survive on the battlefield.

The company is also running parallel efforts to insert ALIAS programme-developed technology, which it brands as Matrix, into civilian aircraft. Sikorsky declines to estimate a timeline for autonomous aircraft certification with the Federal Aviation Administration, but says it is working closely with the US regulator on the technology. To that end, the firm in January announced a co-development agreement with Erickson to retrofit that company’s S-64 Air Crane heavy lift helicopter with Matrix.

“Our work with Erickson presents an opportunity to do a proof of concept of Matrix technology in aerial firefighting and gain operational experience,” the company says.

Sikorsky also says it is working with an undisclosed customer to integrate Matrix onto an unspecified fixed-wing civilian aircraft.

The ALIAS programme announcement comes about two months after US Army Brigadier General Walter Rugen, director of the service’s Future Vertical Lift Cross Functional Team, told FlightGlobal that autonomous flight controls would allow army helicopters, such as FARA or FLRAA, to fly at speeds that are higher and altitudes that are lower than previously thought possible or safe. By flying low and fast, the army believes it can hide its rotorcraft from enemy radar behind hills and in valleys better than is possible with human pilots. 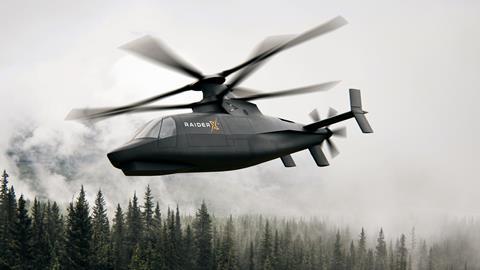 From such low altitudes, US Army helicopters can infiltrate enemy airspace and launch attacks or drop off troops. “The lower tier of the air domain is, in fact, decisive,” said Rugen. “We don’t have a problem that the high flyers do. We can hide in the clutter, show up at the time and place of our choosing to really create chaos in the enemy’s decision cycle.”

Igor Cherepinsky, director of Sikorsky Innovations, says flights below 100ft above ground level will be facilitated by ALIAS using a combination of Collins Aerospace’s Geiger-mode LIDAR, undisclosed electro-optical sensors, short-wave infrared cameras, digital terrain elevation data and GPS, among other technologies. That should give the system the ability to fly nap-of-the-earth at night, while avoiding controlled flight into terrain or collisions with power lines, he says.

Using LIDAR means ALIAS-equipped rotorcraft would be emitting energy that could be picked up by adversaries, but Cherepinsky says it is a necessary risk that can be managed. “If you want to see, you’re going to have to emit something. We don’t have passive sensors that can return range information,” he says. “The ALIAS system itself can manage whether it emits or doesn’t emit.”

Moreover, when flying low LIDAR emission concerns might be limited as the light is likely to be blocked by nearby hills and mountains, says Cherepinsky.

Sikorsky sees ALIAS being able to handle a range of complex scenarios. When it comes to dropping off troops in a landing zone, the technology won’t just run a pre-set plan, but will be able to help helicopters avoid unforeseen obstacles and enemy fire. The system should be able to detect blue forces and red forces, and make adjustments, including changing a helicopter’s angle of attack, instructing troop disembarkment and even turning the aircraft to block enemy fire, says Cherepinsky.

One of the most challenging aspects of making practical use of ALIAS will be communicating to the pilots and crew what the autonomous flight system is doing and planning to do next, says Cherepinsky. To that end, the company is exploring ways to display information on tablet computers, as well as augmented reality headsets for soldiers.

Still, the choice of tablets or helmet-mounted head-up displays might not be as important as how data is presented and in what volumes. That will be especially true as a helicopter autonomously zips along, a few hundred feet above the ground, making many complex flight control decisions simultaneously.

“Even though you are in the loop, you’re not in the loop in the millisecond to millisecond,” says Cherepinsky. “As a machine starts to make these decisions, we have to work with both pilots and crew in the back. How many of those decisions need to be approved and what happens? Just making sure there’s no information overload for humans is a big challenge related to what we’re working through right now.”