The Republic of Singapore Air Force (RSAF) will feature a trio of fighter aircraft as part of its aerial display at this year's edition of the Singapore air show.

One Boeing F-15SG and two General Dynamics F-16Cs will perform together for the first time in a series of 15 manoeuvres including what the air force describes as a "vertical split" and "knife edge pass".

In one such manoeuvre, the three aircraft will appear in an arrowhead formation before pulling up vertically and executing a synchronised barrel roll.

Another move will see the two F-16Cs fly towards each other head-on at over 1,400km/h (760kt) before rolling in alternate directions.

The performance will conclude with a "golden salute" that will see the three aircraft approach the viewing area before pulling up vertically, with the F-16Cs releasing chaff and banking in opposite directions while the F-15SG continues skyward. 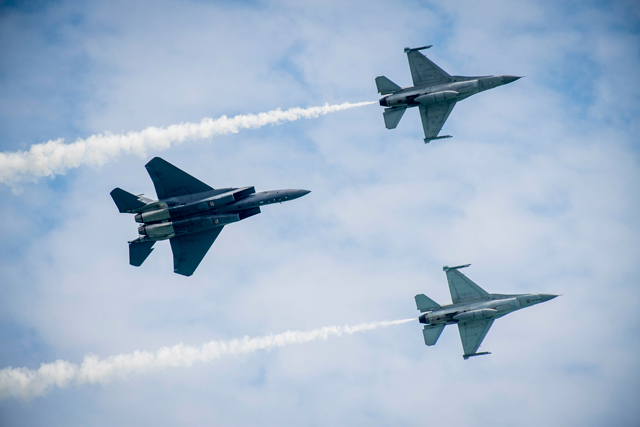 "The systems and capabilities that the RSAF have inducted over the years provide us with a range of capabilities that can be useful in a wide range of scenarios to meet the demands of both conventional and unconventional threats in an evolving security landscape," says RSAF’s Chief of Air Force, Major-General Mervyn Tan. "As a small country with no strategic depth, Singapore will always need superior air capabilities to protect its interests and borders."