The US Army has validated the Rafael Spike non-line-of-sight (NLOS) missile as an interim long-range weapon for its Boeing AH-64 Apache attack helicopter.

The service says its confidence in the missile was confirmed after the success of a recent test in which a Spike NLOS hit a stationary boat after being launched from an Apache that was 17.3nm (32km) away. The US Army has previously said that 17.3nm was the outer range of the missile. 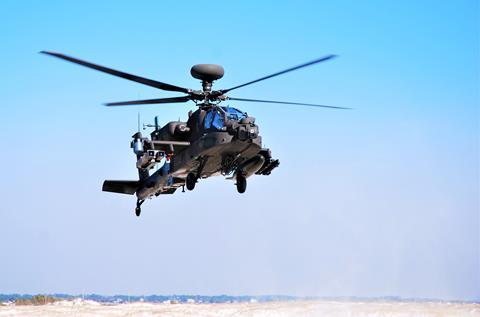 A second launch test, that included a strike on a moving target, was cancelled due to weather, the service says.

“The weapon can strike targets four times further than the Apache’s current carried munitions,” says the US Army, noting the range of the Lockheed Martin AGM-114 Hellfire air-to-ground missile. “It also serves a dual purpose in informing the requirements for Army Aviation’s enduring stand-off weapon, the Long-Range Precision Munition.”

The Spike NLOS appears to be the standard by which potential Long-Range Precision Munition candidates will be judged. The US Army said in February that it is looking for manufacturers to put forward potential missile candidates for a “shoot-off” demonstration planned for the fourth quarter of fiscal year 2022. Presumably, the range requirement is equal to or greater than the Spike NLOS’s 17.3nm, though the US Army has not confirmed this.

The US Army wants longer range air-launched weapons to keep its rotorcraft out of the reach of adversaries’ surface-to-air weapons, such as the Pantsir-S1 system. The Hellfire’s range is limited to 4.3nm. The Long-Range Precision Munition would also be carried aboard the forthcoming Future Attack Reconnaissance Aircraft (FARA).

Because the Spike NLOS has a range beyond the line of sight of the Apache and FARA, the US Army is hoping to use offboard sensors, carried by soldiers, armoured vehicles, tactical unmanned air vehicles (UAVs) or air-launched effects, to relay targeting data. For example, last October, an AH-64E, a Textron Shadow RQ-7BV2 Block 3 tactical UAV and a General Atomics Aeronautical Systems MQ-1C Gray Eagle Extended Range UAV successfully worked together to carry out an air-to-ground Hellfire missile attack at the Dugway Proving Ground in Utah.

The disclosure of the maritime strike demonstration of the Spike NLOS comes after the US Army’s AH-64E was scheduled last August to start receiving the Version 6 hardware and software which give the rotorcraft maritime strike abilities. In particular, the upgrade optimises the helicopter’s APG-78 Longbow fire control radar for ship hunting, while the radar’s range is increased from 4.32nm to 8.6nm.

The US Army, as well as the other US military service branches, are shifting focus to the Western Pacific to deter and combat possible aggression from the Chinese military. The service sees a role for helicopters in possible island-hopping campaigns.