Uber further outlined its vision for a network of air taxis at its second annual Elevate conference in Los Angeles on 8 May, including the unveiling of several new eVTOL aircraft concepts as well as partnerships with NASA and the US Army Research Lab.

Uber aims to run a network, called uberAir, of electric vertical takeoff and landing aircraft across the most densely populated cities in the world. The company doesn’t plan to manufacturer eVTOL aircraft, but instead is outlining specifications for aircraft manufacturers. It aims to provide an on-demand aerial taxi app and supporting infrastructure for participants in its network.

The company would like electric aircraft in its network to have a cruising speed of 130kt to 174kt (241km/h to 322km/h); cruising altitude of around 1,000ft to 2,000ft above ground; expected battery range per charge of 52nm (97km); and a recharging time of about 5min – among other specifications. 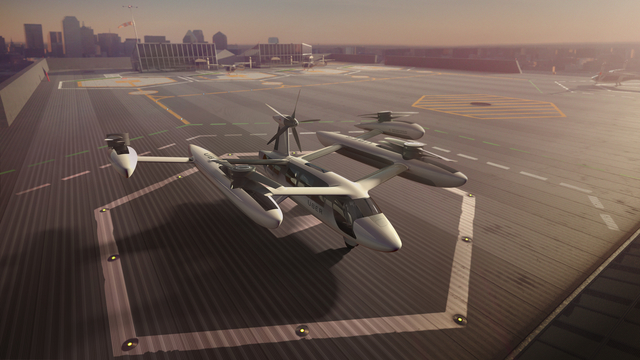 At the conference, new aircraft concepts were unveiled by Uber, Embraer, Pipistrel and Karem Aircraft.

Uber presented its eCRM-003 aircraft design, a conceptual rendering the company said was meant to stimulate new ideas and discussion among aircraft manufacturers.

Embraer’s design is a lift-and-cruise aircraft concept; Pipistrel’s design is blended wing body without any visible rotors for vertical lift; and Karem Aircraft’s Butterfly concept is a quad tiltrotor aircraft.

Uber and its partners are working towards a goal of launching flight demonstrations in 2020 and commercial trips by 2023.

Uber and the US Army Research Laboratory also announced that they signed a research and development agreement and a joint work statement to create a stacked co-rotating rotor: two rotors placed on top of each other which rotate in the same direction and could be significantly quieter than conventional rotor designs.

Uber also announced that it signed an agreement with NASA to share its plans for implementing its flying rideshare network. In particular, at its research facility at the Dallas Fort Worth International Airport, NASA will use data supplied by Uber to simulate the impact of a small passenger-carrying aircraft as it flies through DFW airspace during peak scheduled air traffic. Analysis of these simulations will help identify safety issues.