The helicopters are part of production Lot 16, the Department of Defense said in a notice on 18 January. Naval Air Systems Command is contracting the aircraft on behalf of the USMC.

Some 60% of the work on the attack helicopters will be performed in Fort Worth, Texas and the rest will be done in Amarillo, Texas. The lot is expected to be completed in January 2022.

The recent award comes after Bell, a subsidiary of Textron, was awarded in August 2018 a $510 million contract to manufacture 29 AH-1Z Viper attack helicopters as part of Lot 15. 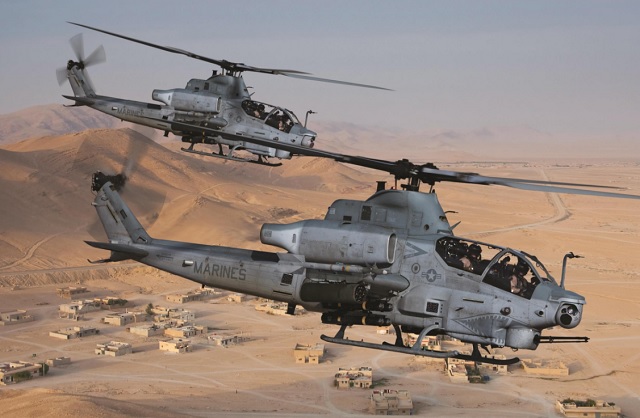 Bell said last year that it expected the USMC will continue to take deliveries of AH-1Z Viper until 2022. The service received the last deliveries of its sister aircraft, the Bell UH-1Y Venom utility helicopter, last year.

The Venom and the Viper are based on the Vietnam-era family of Huey helicopters, the UH-1 Iroquois and the derivative AH-1 Cobra. Bell says the modern variants share 85% of their parts including a common tail boom, engines, rotor system, drivetrain, avionics architecture, software and controls.

Bell advertises the AH-1Z as having a max airspeed of 200kt (370.4km/h) and a combat radius of 131nm (242.6km). The helicopter has two pilots, a max useful load of 2,614.5kg (5,764lb), and can be equipped with a variety of weapons combinations including two Sidewinder air-to-air missiles or 16 Hellfire air-to-ground missiles.