All 147 of the US Marine Corps’ Sikorsky CH-53E Super Stallion rotorcraft will be overhauled to address safety and availability issues that have been evident in the fleet since 2014, the service has announced.

Following the fatal crash of a US Navy MH-53E Sea Dragon variant in January 2014 which resulted from an electrical fault sparking a fire, an investigation concluded that the condition of the aircraft was “degraded”, and the remaining examples will be “reset” to increase the safety and readiness of the fleet.

“What was discovered was that the material condition of the aircraft – both the CH-53E and the MH-53E – was degraded,” says Col Hank Vanderborght, programme manager for the H-53 programme office at US Naval Air Systems Command. “Those helicopters have been around since the early 1980s, so 30-plus years, and we’d been at war for the last 15 years, so the machines had been used pretty hard.”

USMC deputy commandant for aviation Lt Gen Jon Davis said earlier this year that the CH-53E had “probably the worst” readiness rate in the service’s inventory, and noted that the overhaul programme was about to begin. Each of the heavy-lift aircraft will undergo a 110-day overhaul that will see it stripped and rebuilt, with changes made to any components as necessary.

One aircraft has been completed to date; an example that was used to validate the concept in April at Marine Corps Air Station New River in North Carolina. This was returned to operations in June. The USMC notes that this particular example had not been flown for four years, but was granted operational status again after 12 days of functional flight checks following the overhaul.

Five more examples have started to receive the overhaul; three at New River and two at MCAS Miramar in California. There are plans to eventually lift this to 16 being modified at any one time, with seven at each of the sites and two at MCAS Kaneohe Bay in Hawaii. 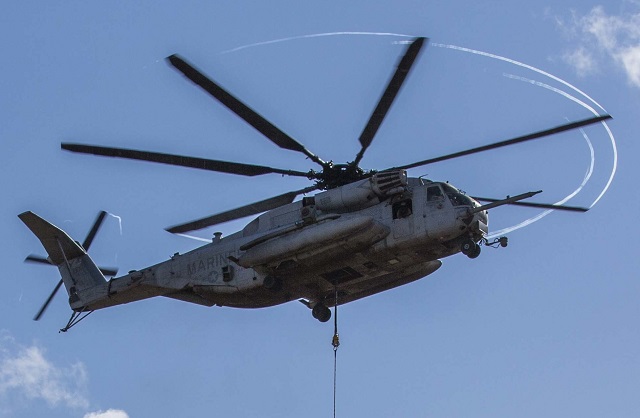 After the incident in 2014, fuel line replacements and rewiring had been carried out on a large part of the fleet, which increased aircraft availability to 30%, after being only 20% in 2015.

“We only had 30 or so aircraft up last year,” Vanderborght says. “We’re in the 50s now, so we’ve rebounded pretty well from a year ago.”

Preventative work will also be carried out to make sure the fleet does not fall into the same rut, and maintainer training will be a key part of that, Vanderborght notes. The current method emphasises turning around aircraft as quickly as possible, instead of dealing with underlying issues, he says.

“Before 2001, maintainers would troubleshoot the system and take a long time to understand it, so there was a lot of knowledge developed by on-the-job training. We’ve kind of lost all that knowledge. I would say the Marines today – not to their fault – are not as knowledgeable about the aircraft as they were prior to the war,” Vanderborght notes.

The production line for the CH-53E has been shut down, so overhaul is key to keeping the fleet going until it is replaced with the developmental CH-53K variant.