US Army pilots test flew an autonomous Sikorsky S-76B, a modified commercial helicopter, which was developed by the Lockheed Martin subsidiary and the Defense Advanced Research Projects Agency (DARPA).

The event marked the first time a non-Sikorsky pilot operated the experimental aircraft. The Stratford, Connecticut-based company was keen to point to the flight as an indication of growing interest and participation from the Army in the joint DARPA-Sikorsky Aircrew Labor In-Cockpit Automation System (ALIAS) programme.

Sikorsky says its modified S-76B, known as the Sikorsky Autonomy Research Aircraft (SARA), has accumulated more than 300h of autonomous flight using its MATRIX hardware and software. During the recent Army test flights, the aircraft was operated at different times by pilots on board and pilots on the ground. 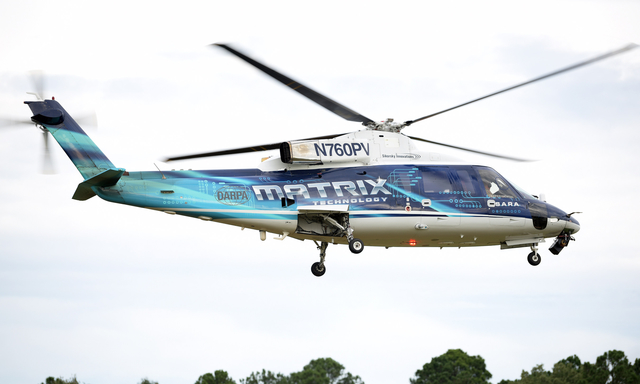 The goal of the programme is to create autonomous flight controls that allow pilots to focus on tasks unrelated to flying the helicopter, such as additional mission planning, close air support or medivac.

"We're demonstrating a certifiable autonomy solution that is going to drastically change the way pilots fly," said Mark Ward, chief pilot at Sikorsky’s Stratford, Connecticut Flight Test Center. "We're confident that MATRIX Technology will allow pilots to focus on their missions. This technology will ultimately decrease instances of the number one cause of helicopter crashes: controlled flight into terrain."

The Army and DARPA are working with Sikorsky to improve the autonomous MATRIX system, aiming to eventually turn it into a tailorable autonomy kit to be installed in fixed-wing aircraft and helicopters. The manufacturer plans to add its autonomous technology into a UH-60 Black Hawk, which it will test fly sometime in the next couple of months.