Holloman AFB in New Mexico has become ground zero for the US Air Force’s shakeup of General Atomics Aeronautical Systems MQ-1 Predator and MQ-9 Reaper unmanned air vehicles operations, and will soon be training more pilots per year than any other schoolhouse in the service, manned or unmanned – bypassing even Boeing C-17 pilot output.

After years of critical understaffing driven by wartime commitments, the 49th Wing’s three remotely-piloted aircraft training squadrons at Holloman AFB are set to increase pilot output by 43% over the next year, going from 280 MQ-1 and MQ-9 pilot graduates in 2015 to 400 in 2016.

The formal training unit has been getting by for years with just 50% to 60% of the instructor pilots it needs as the operational demand for Predator and Reaper combat air patrols, or orbits, has grown beyond capacity.

Any spare pilot, even instructors, were shifted to operational bases like Creech AFB in Nevada as America’s war on terrorist groups like Al-Qaeda and the Islamic State (IS) intensified around the globe. At its height earlier this year the air force was manning 65 combat orbits, each supported by dozens of pilots and sensors operators and three MQ-1 or MQ-9 aircraft.

The air force acknowledged earlier this year that its MQ-1 and MQ-9 pilots have been burning out and quitting the service faster than they can be replaced, with manning levels at operational units dipping to about 70%.

“The way to get to long-term health for the MQ-1 and MQ-9 enterprise will be to fix the training pipeline here at Holloman,” Col Robert Kiebler, commander of the 49th Wing, said in an interview with Flightglobal. “Across the enterprise, manning has been a significant problem – really for the past five to 10 years since the inception and the real ramp-up of the MQ-1 and MQ-9 programmes."

With approval from the US Secretary of Defense, the air force is currently drawing down to 60 combat orbits, despite active operations in countries like Iraq, Syria, Yemen, Libya and Somalia. That gives the enterprise some “breathing room” to make changes.

Kiebler says Holloman AFB is starting to receive 100 or so active-duty pilots from places like Creech AFB in Nevada – the largest active-duty unit – who will go through a two-month instructor course. Those airmen are being relieved at the operation centres by qualified MQ-1 and MQ-9 pilots mobilised from the guard and reserve force.

The commander expects to have these new instructors trained and ready by February or March of 2016. “By this time next year, we’re going to be the largest formal training unit in the entire air force,” says Kiebler, adding that Holloman AFB is also home to two Lockheed Martin F-16 training squadrons and the German air force’s Panavia Tornado GR4 flight training centre. 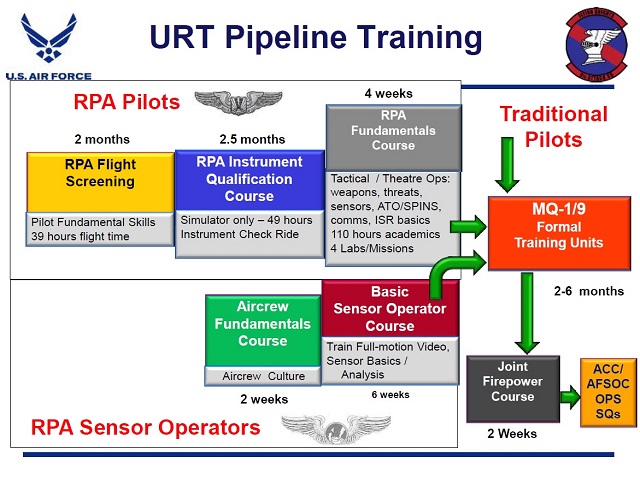 RPA training capacity is expected to outpace the number of undergraduates arriving from the Air Education and Training Command’s unmanned aircraft academy at Randolph AFB in Texas. As a stopgap measure 80 pilots previously destined to fly manned aircraft such as F-16s, Fairchild Republic A-10s and Boeing B-1Bs will be diverted to the MQ-1 and MQ-9 force for their first three to four-year tour. Additional pilots will be sourced directly from bomber, fighter and transport squadrons.

Meanwhile, remotely piloted aircraft undergraduate training will ramp up at the 558th Flying Training Squadron at Randolph AFB, which also trains crew for the Northrop Grumman RQ-4 Global Hawk UAV community. Air Combat Command says undergraduate throughput will increase by 60%, from 188 RPA pilots this budget year to more than 300 in 2017 – a figure that includes US Marine Corps and Air National Guard UAV pilots.

In terms of equipment, Kiebler's squadrons might receive one or two more MQ-9 aircraft over the next year – but he says the training increase is possible with the equipment already at the base.

As part of the drawdown to 60 orbits, the air force has been able to set a target date for the retirement of the MQ-1 Predator, which was introduced in 1995. The current plan is to transition entirely to the more capable MQ-9 by 2018.

The 6th Reconnaissance Squadron at Holloman is the last MQ-1 formal training unit, making up about one-third of the training requirement. Its throughput will also increase along with the two MQ-9 training squadrons until it transitions to the MQ-9. 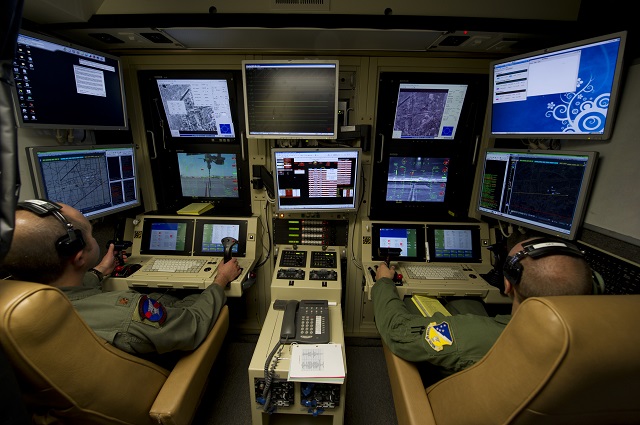 Commensurate with increase in active-duty instructors, the number of contractors at the base will also increase. CAE provides the bulk of contractor support, and Kiebler says most of the contractors are former air force pilots.

“It’s happening on both the operational side and here in training,” he says. “We’re one of the only locations where contractors actually fly air force assets and train students side-by-side with active-duty instructors.”

Welsh said at a press briefing in January that demand for combat support form RPAs has been outpacing supply since 2007, and training throughput is the biggest challenge: “Training 180 and losing 240 [pilots per year] is not a winning proposition for us,” he said.

The air force is building towards a requirement of 361 MQ-9s, and has requested $553 million in fiscal year 2016 to buy 29 more aircraft from General Atomics. By the end of next year it expects to have 263 Reapers and 145 Predators in its inventory. It is also investing in new Block 50 ground control stations and an automatic takeoff and landing capability.