Canadian investigators have traced an explosion and uncontained engine failure on a Bombardier CS100, during ground tests, to an oil-feed tube seal failure, resulting from misinterpretation of shutdown procedures.

Failure of the seal enabled engine oil to combine with the cooling airflow in the Pratt & Whitney PW1500G engine, and this air-oil mixture auto-ignited as a result of high ambient temperature.

The fire resulted in the failure of the whole turbine rotor stage, causing severe damage to the powerplant as well as the nacelle and the aircraft’s wing.

None of the six crew members on board was injured in the 29 May 2014 accident, which occurred during pre-certification work on the FTV-1 test aircraft at Montreal’s Mirabel airport.

Canada’s Transportation Safety Board states that the seal failed as a consequence of “insufficient cooldown” – the powerplant had been shut down after a high-thrust operation but without allowing enough time for internal temperatures to fall.

Pratt & Whitney had issued special instructions outlining cooling procedures before shutdown, with alternate solutions for hot shutdowns. The engine manufacturer had "not foreseen" the detrimental effect of "heat soaking" during hot shutdowns on the seals, the inquiry says.

“Bombardier interpreted the alternate shutdowns…as an alternative equal to the other shutdown options,” states the inquiry. “This resulted in the engine being exposed to one or more hot shutdowns, which led to heat-soaking beyond the design criteria of the bearing oil-feed tube’s seal.” 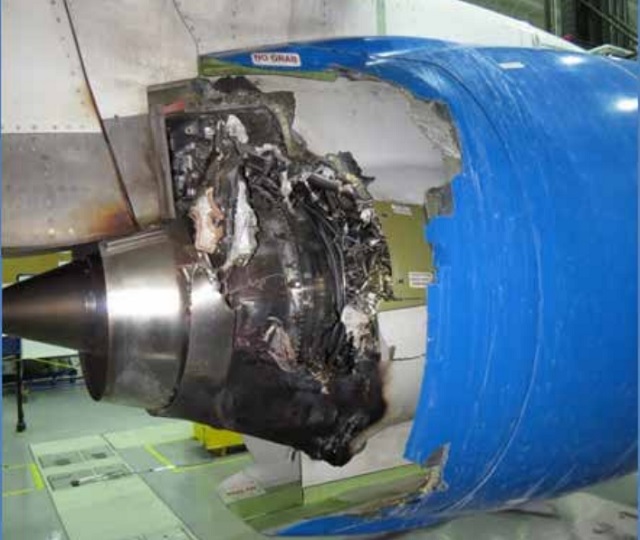 The engine testing on the day had involved two phases, beginning with the right-hand engine being run at various power settings to obtain cabin air samples.

This was to be followed by a left-hand engine run, to check for leaks on an oil-pump assembly which had been replaced the day before. The left engine would initially be run with the thrust-reverser doors open, before being shut down, whereupon the reverser doors would be closed and the engine restarted for a second run.

Running of the right-hand engine proceeded uneventfully and testing moved to the left-hand engine.

Investigators state that the engine was run at idle power, with no leaks found, before the reverser doors were closed and the engine restarted.

It was powered up to 60% of N1 for just over 15min, then thrust was increased to 74% for 5min 45s, at which point the explosion occurred.

The crew included two pilots in the cockpit. There was no fire-warning indication but the aircraft did generate engine vibration and failure messages on the engine indication and crew alerting system screen.

Investigators state that the commanding pilot secured the left-hand engine and shut down the right-hand engine, but did not activate the fire bottles. The commander ordered an evacuation of the jet while the second pilot requested airport firefighting assistance.

Initial efforts to extinguish the fire, by Bombardier personnel, took place about 2min 30s after the explosion.

Airport firefighters arrived some 2min later, and the first fire-suppressant attack from emergency vehicles commencing 3min after that. The fire was declared extinguished 13min after it began.

Investigators state that, although ground personnel successfully dealt with the fire, there had been an “increased risk” of the blaze spreading because the engine fire bottles had not been used.