The US Federal Aviation Administration has closed both Houston Intercontinental and Houston Hobby airports through at least 28 August, following heavy rains from tropical storm Harvey.

The Houston Airport System, which operates both airports, cites severe weather due to Harvey, which hit the Texas coast south of Houston late on 25 August, for the closures.

A total of 1,859 flights have been cancelled from Houston's airports, including 1,456 at Intercontinental and 403 at Hobby, for the three-day period through 28 August, the website Flightaware.com shows.

The runways at Houston Hobby were underwater as of 14:44 local time today, according to local reports. 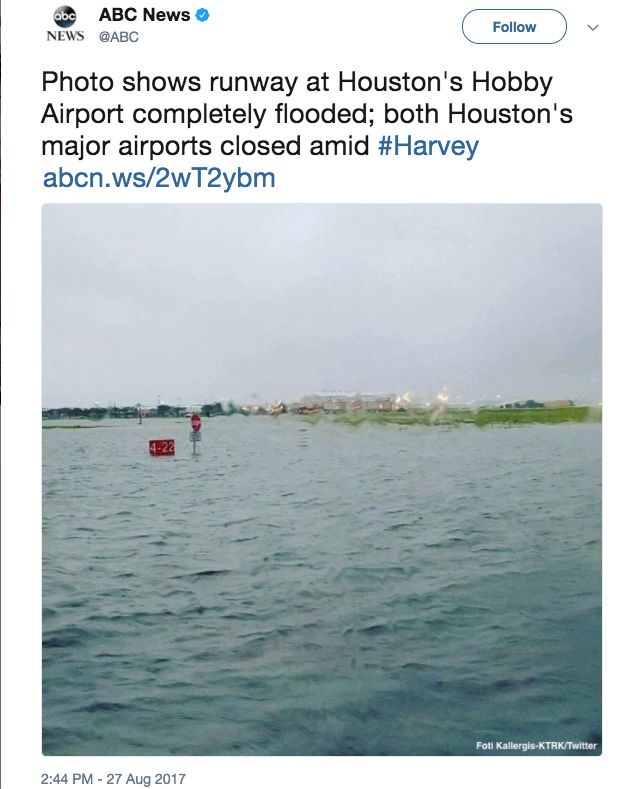 Houston Intercontinental had received 15in of rain from the storm as of 10:30 local time, United says in an update to employees today. The airport was forecast to receive another 10in to 12in of rain today.

"Our Network Operations Center team is working on balancing the remaining cancellations for today, and we will evaluate the possibility of resuming operations on Monday afternoon with mainline hub-to-hub and international widebody flying," the Chicago-based carrier says.

United has cancelled Houston flights through at least noon tomorrow, a spokesman says. He does not provide a number for how many flights have been cancelled.

Southwest has cancelled all of its Houston Hobby flights through Tuesday, the Dallas-based carrier said on Twitter.

"Southwest leaders are working with the appropriate agencies on a plan to help employees and customers who are in the airport or other Houston Hobby facilities when it is safe to do so," a spokeswoman says.

Southwest has cancelled 898 flights and United 1,098 flights for the three-day period through 28 August, according to Flightaware.com.