A Saab Gripen D crashed at Čáslav air base in the Czech Republic while landing during its participation in the multinational exercise Lion Effort on 19 May.

Pictures have emerged on Twitter showing the crashed aircraft off the end of the runway at Čáslav. The mishap marks the first non-Swedish air force Gripen crash, Flightglobal’s MiliCAS database shows.

Both pilots of the two-seater variant ejected from the aircraft and are unharmed. 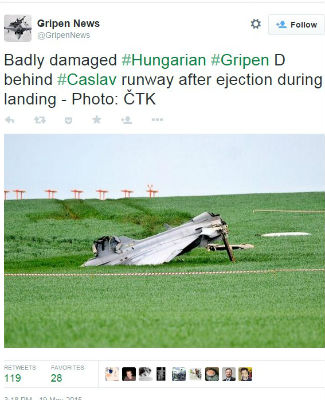 Both the Hungarian and Czech air forces had 14 Gripens in their inventories – 12 single-seater C models and two two-seater D models before the crash. Their aircraft are leased from the Swedish government under long-term deals.

Five Gripens from the Hungarian air force, along with other examples from the Czech Republic's Čáslav-based 211 Sqn and the Swedish air force were expected to take part in the NATO exercise from 11 to 24 May. The activity also involves Czech air force Aero Vodochody L-159 advanced light combat aircraft, Mil Mi-24 and Mi-171 helicopters and Airbus Defence & Space C295 medium transports, as well as an anti-aircraft missile regiment.

German air force Eurofighters and Polish Lockheed Martin F-16s are also supporting the Lion Effort manoeuvres, flying from their home bases. A NATO Boeing E-3A airborne warning and control system aircraft was also due to assist with command and control, operating from Poland.

Thailand, another operator of the Gripen, is taking part in an observer role only, NATO says.