The last example of the Royal Air Force’s 14-strong fleet of Airbus Defence & Space A330 Voyager tankers has made an appearance, fresh from being painted at Manching in Germany, and ahead of its planned delivery to manager AirTanker in July.

Future Strategic Tanker Aircraft 14 (FSTA14) took off from Airbus’s Getafe, Spain site on the afternoon of 31 May, landing at Schönefeld in Berlin a couple of hours later, where it was displayed to the public at the ILA Berlin air show.

This is the last aircraft to fulfil the 2004 contract, and followed the delivery of FSTA13 in February. This example was converted into a civilian configuration after delivery, and the same will happen to FSTA14.

Of the 14 Voyagers in the UK’s FSTA fleet, nine are in the RAF’s “core” lineup and the other five are considered “surge” aircraft, with the last two contributing to the latter.

The UK’s Strategic Defence and Security Review – published in November – confirmed the fleet will be available for VIP transport, provided through a roll-on, roll-off system that can be applied to any of the aircraft. 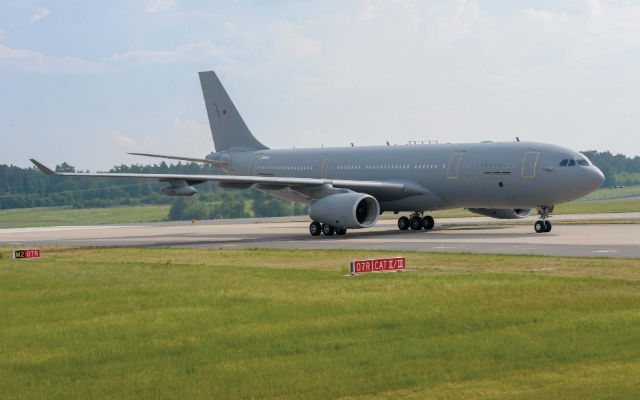 The Netherlands, Norway and Poland are pooling a fleet of A330 multirole tanker transports under the Multinational MRTT Fleet (MMF) effort, a contract signing for which is pending.

It is believed this will happen in the coming months but Airbus could not confirm this, stating negotiations are “on track”.

Germany revealed plans in December to join the effort as its Airbus A310 tanker fleet ages, and it is understood it will join after the initial contract is signed.