IN FOCUS: Boom and bust, the regional jet phenomenon

Twenty years after the delivery of ­Bombardier's first regional jet, a change in market dynamics has caused orders for 50-seat regional jets to ­collapse and production to cease, with no successors planned.

Airlines have shifted towards using larger aircraft and turboprops on routes previously served by 50-seat regional jets. This change in strategy was largely dictated by fuel prices, as well as changes to scope clauses in the contracts between US airlines and pilot unions. Eddy Pieniazek, director and global head of consultancy at Flightglobal Ascend, says low fuel prices drove the development of the ­regional jet: "In the '90s, we were talking about oil prices of around $20 per ­barrel, at some points $10 per barrel, and manufacturers saw the opportunity to build something different."

Pieniazek says turboprop manufacturers Bombardier and Embraer saw the market for these aircraft as being relatively small, and wanted to "broaden their horizons". Bombardier was the first to do so, with its purchase of Canadair in 1986 - when it began initial development of its regional jet. The decision to go ahead with the programme was made by then Bombardier chief executive Laurent Beaudoin in March 1989, and the first Bombardier Canadair Regional Jet was delivered to launch customer Lufthansa CityLine in October 1992. The 50-seat aircraft was a stretched development of the manufacturer's Challenger business jet.

After Bombardier agreed to buy Shorts in June 1989, development was stopped on the Belfast-based manufacturer's proposed FJX regional jet, leaving a gap in the market. Embraer responded with the Embraer ERJ-145, a development of its 30-seat EMB-120 turboprop, which followed the CRJ into the market in August 1995.

Bert van Leeuwen, head of aviation ­research at DVB Bank, explains that after a slow start the market for regional jets became mainstream. "There was a lot of doubt over whether the regional jet would ever become a success or whether that market would stay with the turboprop. The higher fuel burn of the jet was a bit of a concern," he says.

Orders suddenly snowballed, however. "They were a good way of getting traffic," he says. "It was a plane that could be used to fly smaller groups of passengers for longer distances. It was perceived as a sexier product, compared to the old-fashioned turboprop." Pieniazek also emphasises how image played a part in the rise of the regional jet. "They were perceived as being faster, more passenger friendly," he says, adding that airlines preferred the continuity of service and quality that was provided on their networks by "a jet feeding into a jet".

He explains that airlines that had ­previously operated turboprops also took note of the regional jets' different range capabilities, and changed their networks to make use of them. As a result, they started to move into new territories, leading to a decline in the ­turboprop market.

In addition, Pieniazek says the regional jets began to replace larger jets on small-capacity routes: "If you increased frequencies but reduced capacity that was a better service for feeding into the mainlines, so a lot of the RJs started to replace larger aircraft like ­[McDonnell Douglas] DC-9s and [Boeing] 737s on regional routes."

The biggest demand for regional jets came from North America, although van Leeuwen says this was artificially driven partly by scope clauses in the contracts between airlines and pilot unions. "The US majors had labour contracts with high pilots' wages, so they decided to subcontract a lot of the flying to regional airlines with lower wage scales and less labour costs," he says. He explains the move caused pilot unions to demand that the size of aircraft which could be contracted out should be restricted to 50 seats or fewer.

"If they went beyond 50 seats, the wage scales of the major airlines would kick in and that would increase the cost of flying the aircraft significantly," says van Leeuwen. As a result, 50-seat jets were used on routes perhaps better suited to larger aircraft.

The combination of these factors led to a boom in regional jet orders that Pieniazek says took the manufacturers by surprise. Embraer's early 1990s estimate for production of its ERJ-145 was a market for more than 500 aircraft and it planned to be producing up to 80 a year by 2000. In 2000, the year ERJ deliveries reached their peak, Embraer delivered 157 passenger ERJs, which included 112 ERJ-145s and 45 of the 37-seat ERJ-135 variant. Delivery of passenger Bombardier CRJs rose from three in 1992 to peak at 155 in 2003.

Yet as swiftly as orders arrived, the bottom fell out of the market for regional jets. "As we moved into a post-9/11 world, we moved into an era of high fuel prices and all of a sudden the equation changed and the jet had to grow in size in order to keep seat-mile costs down," says Pieniazek. As a result, airline management renegotiated scope clause limits to 70-seat jets and he says this could be increased further. "When the market increased and you had more consolidation, rather than two to three airlines competing in the sector with 50-seaters, you saw just one or two that could sustain a 70-, 90- or maybe 100-seater, so the 50-seater then fell out of favour, " Pieniazek adds.

Carriers such as JetBlue are examples of flying between "a lot of secondary city pairs with bigger aircraft". Commenting on a reversion back to larger aircraft on regional routes, van Leeuwen says: "If it makes sense to fly twice a day instead of four times a day because you get the efficiency in seat-mile costs with a larger aircraft, you're going to do it." He says the "90-seater regional jet is the smallest unit of production that has some economic viability".

In addition to seeing 50-seaters replaced by larger aircraft, van Leeuwen sees turboprops taking market share from regional jets. "On shorter routes you don't lose too much time with a turboprop instead of a jet, and these days the travelling public is more concerned about ticket price," he says. For the same reasons, he sees the possible development of large turboprops with 90 seats as providing competition, even for the larger regional jets. 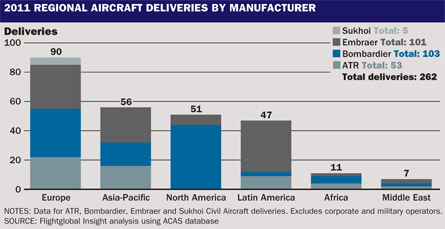 Pieniazek describes all these developments as "a slightly retrograde step to what was going on in the '90s", but says "the cloth is cut by the price of fuel these days".

Describing how airlines required bigger and bigger regional jets, he says: "We saw this wave of 50-seater orders and then a significant increase in 70-seater orders and now with 90-seaters. At the moment, the only fairly popular large regional aircraft is the Embraer 190. Below that there are sales of the CRJ-700, some of the 900, but there are not a lot of sales of even the Embraer 170."

Van Leeuwen says the era of the 50-seat regional jet has been and gone: "It's like a mini-Concorde. It's a fast, sexy-looking machine, but economic reality caught up with it and it's now just blocking the balance sheets of airlines and you have little hope of getting a lot of money if you sell your old CRJ or ERJ." 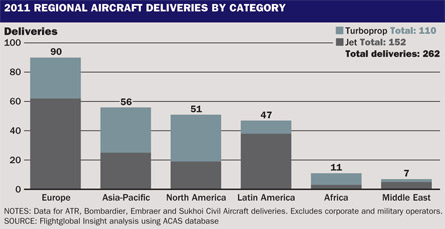 With more regional jets in circulation than the market requires, Pieniazek says airlines are having to be proactive to sell their old aircraft and must accept low prices. "If you're going to run a plane that's fuel thirsty, you have to balance that with a lower acquisition cost," he says, adding that the prices are further affected because of the difficulty of securing financing for used aircraft. "Investment houses are very wary because of the uncertainty over how long they're going to last and who's going to be the next operator," he says.

According to van Leeuwen, the Russian market has absorbed some used regional jets, while in Norway, West Air has converted others into small freighter aircraft. However, he says the majority of CRJs and ERJs being phased out will go to the scrapyard. "You're not getting a lot of money, but a few hundred thousand is still better than nothing."