Aviation analysts concede the industry is positioned for a rebound after five years in the doldrums - but global uncertainty is blocking progress. "I describe the market as underwhelming," says Richard Aboulafia, senior analyst with US-based Teal Group.

"The decline in key indicators has been halted and reversed - unsold inventories are down, utilisation and fuel sales are up and, of course, the US stock market and corporate profits are strong. However, the recovery has been quite muted," he says.

The business aviation industry's weak performance is illustrated by Flight International's 2012 business aircraft census. Data compiled by Flightglobal's Ascend Fleets database shows that in the 12 months from 30 September 2011, the world's active turbine corporate aircraft fleet climbed by about 2.5% to more than 29,000 jets and turboprops, compared with 28,300 aircraft in 2011. 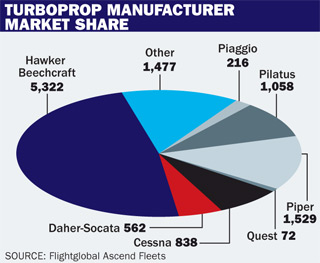 "It's been tough going for the industry, with worldwide business jet deliveries plunging to half their 2008 peak [of 1,265]," says business aviation analyst Brian Foley. He adds that it could have been worse if not for a "few pockets of strength in some developing parts of the world".

In the census period, the highly prized markers of Latin America and Asia-Pacific have continued to be a lifeline for many airframers. The turbine fleet in Latin America and the Caribbean - which Ascend has grouped together for the census - climbed since the last census by 207 aircraft to 3,912 corporate jets and turboprops.

This rise of nearly 6% is mostly attributable to Brazil and Mexico, where demand for these flexible forms of transport is booming. In Brazil - home to the largest installed base of turboprops in the region - the fleet rose by nearly 150 to 1,371 turbine business aircraft. In Mexico - which has Latin America's largest business jet fleet - the tally climbed by more than 4% to 1,003 jets and turboprops.

Asia-Pacific countries continue to make strides. Flightglobal's Ascend Online database reveals the fleet has risen by almost 150 aircraft to 834 jets and 625 turboprops. The dominance of the Chinese market is reflected in these figures, with an impressive fleet gain of 30% to 158 jets and 28 turboprops. In Hong Kong, which has only one business turboprop, the inventory climbed by 15 jets to 86. 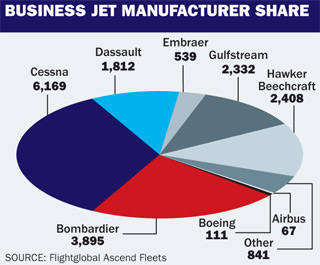 For some analysts, China has not turned into the cash cow for airframers it was predicted to become. Aboulafia admits the region has provided rich pickings, "but given bloated expectations, it's been relatively disappointing".

Foley suggests China has provided "a conveniently timed mini-rescue", for the industry. "It has been a nice shot in the arm at a critical moment, but now it's starting to slow down," he adds. "Chinese GDP has almost halved from 2010, and its stock market is at its lowest in three-and-a-half years. Jet manufacturers have now shifted from sales mode to order preservation."

Latin America could also be in for a bumpy ride, given the economic slowdown across the region. "Brazil's strong currency could create headwinds," says Aboulafia.

Aboulafia is convinced a full recovery will only kick in when the world's economies finally stabilise and the jet fleet replacement cycle in the USA - which has the largest business aircraft fleet - is in full swing.

While the US market is fragile, signs of recovery are beginning to emerge. Flightglobal's Ascend Online database reveals the USA's inventory of jets and turboprops climbed by more than 300 during the census period to 17,438 turbine business aircraft.

Europe, in contrast, has had a pitiful 12 months. Ascend's database shows the continent's business jet and turboprop fleet contracted during the census period, from 3,841 to 3,811 aircraft. This has been largely driven by the financial misery that continues to grip the region, resulting in aircraft cancellations and depleted sales.

Not surprisingly, perhaps, the eurozone's sovereign debt casualties have been hit hardest: Greece and Italy's inventories fell by 11 aircraft apiece. Spain has lost a dozen jets from its inventory since the last census, while Portugal has seen its inventory dwindle by eight business jets as Lisbon-based NetJets Europe continues to dispose of its older types.

The UK and France - traditionally two of the strongest markets in Europe - have not been isolated from the economic crisis. Their turbine fleets declined during the past 12 months by 30 and one aircraft respectively.

Germany is one of the region's few bright spots, recording an increase of 14 jets and turboprops during the past 12 months.

The entry-level and light-jet sectors continue to falter, harnessed by a drought of traditional buyers - small companies, owner-flyers - in established markets such as the USA and Europe. The problem is exacerbated by the stubbornly high inventories of used aircraft, which continue to force prices down.

"It is a buyers market right now and there are some great bargains in the light business jet sector," says Brendan Lodge, business development director for UK-based Jet Brokers Europe.

Hawker Beechcraft has borne the brunt of the industry slump. The US airframer - in negotiations with China's Superior Aircraft Beijing to sell off its business aircraft arm - has seen its inventory inch forward by only 14 business jets during the census period, bringing its tally to 2,123 aircraft. 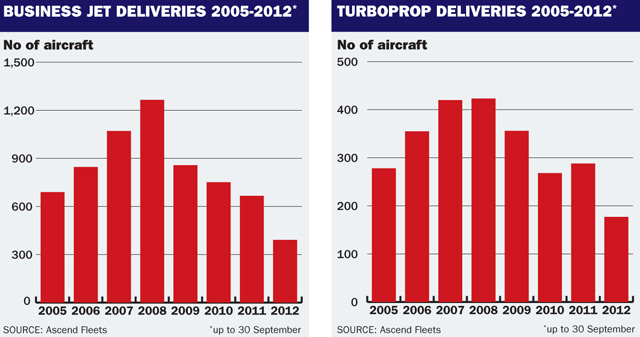 Hawker Beechcraft's only in-production aircraft are the Hawker 900XP and the larger Hawker 4000. The midsize 900XP boasts a global tally of 1,412 - 10 more than last year - while the flagship 4000's inventory tally had a modest rise of nine aircraft to 63.

The King Air fleet fared much better, as the appeal of this ubiquitous, highly versatile, twin-engined turboprop continues unabated. Overall, the fleet has climbed by 45 to 5,250.

Despite having a product line firmly in the beleaguered lower half of the aircraft spectrum, Cessna has fared better than Hawker Beechcraft in the past six months due, largely, to the introduction of its CJ4 in 2010. The light jet's global tally more than doubled from 50 to 103 aircraft during the past 12 months, the Ascend database shows.

Inventories of the older CJ2, CJ3 and XLS+ nudged forward by 17, 23 and 29 aircraft respectively, giving a combined global fleet of 1,270 aircraft. The airframer's entry-level Mustang fleet jumped by 10% to 390 aircraft.

Despite the economic uncertainty, Cessna remains committed to its bottom-end product line and it is working on a new design called the M2 to bridge the gap between the Mustang and CJ2+ when it enters service next year.

The 18-year-old Caravan turboprop single has not been overlooked. The top-end Grand Caravan is being upgraded with the Pratt & Whitney Canada PT6A-140 engine, which will extend its mission profiles at higher temperatures and higher altitudes when it enters service this quarter, says Cessna. The improvement should help revitalise corporate sales of the aircraft as its fleet has stagnated since the last census at 350 aircraft.

Cessna - with a global fleet of nearly 6,200 Citations - also has its eye on the top half of the market. In the past 12 months, the airframer has unveiled two new products: the midsize Latitude - scheduled to enter service in 2013 - and the super-midsize Longitude, which will join the nine-passenger twinjet in service four years later.

The aircraft are pitched against Embraer's eagerly anticipated, but delayed, midsize offerings - the Legacy 450 and 500.The larger Legacy 500 is earmarked for service entry in 2014 and the 450 about 18 months later.

Brazilian airframer Embraer made the largest fleet gains of any manufacturer - a 20% increase in its global inventory to 539. The Phenom 100 inventory climbed from 206 to 241, while the tally of its Phenom 300 stablemate rose by 57 to 99 during the census period.

A total of 11 aircraft have been added to the Legacy 600/650 family inventory, bringing the total to 186 of the large-cabin types. There was a modest increase of four top-of-the-range Lineage 1000s, bringing the total inventory for the super-large business jet to 13 aircraft.

Bombardier's varied product line has helped to lessen the impact of the economic crisis on its lower-end business jets. The Canadian airframer grew its inventory during the census period from 3,736 to 3,895 business jets. 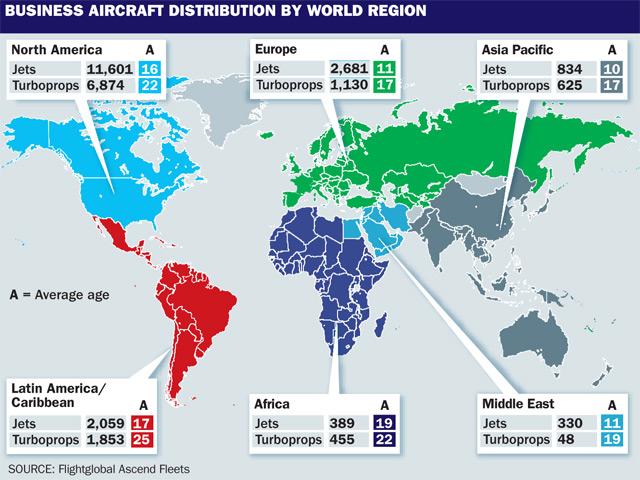 Not surprisingly, the Learjet 40 and 45 fleet - at the bottom of its range - climbed by only four and 12 aircraft respectively since the last census. Bombardier will hope the next-generation versions of these twinjets - the Learjet 70 and 75 - will revive customer interest in its light and superlight offerings when they enter service next year.

The Learjet 60XR inventory nudged ahead by only 13 aircraft in the past 12 months, amid waning interest in the midsize product. Such lacklustre performance persuaded Bombardier in September to pause production of the 60XR - the last aircraft completely designed and built in Wichita. But the company remains committed to this sector - the all-composite Learjet 85 is scheduled to enter service next year, while a smaller, scaled-down version of the eight-passenger aircraft is being evaluated.

The aircraft's closest competitor - the Gulfstream G650 - is poised for service entry having secured full certification in September. Gulfstream says the next delivery slot for the ultra-long-range business jet is five years away, while the backlog for its large-cabin stablemates the G450 and G550 are 18 and 24 months respectively - reflecting the strength of business aviation's top end.

Dassault's super-midsize Falcon 2000 - touted by the French airframer as a "game changer" in this increasingly competitive sector - is being readied for certification and first delivery next year.

Meanwhile, resurgence at the top-end of the business jet market has helped Airbus and Boeing to expand their fleets of VIP-configured airliners.

Cancellations and deferrals across the BBJ family have slowed during the past 12 months. This year's census reveals fleet gains for the BBJ, BBJ2, BBJ3 and cargo door-equipped BBJC of five aircraft.

Meanwhile, Airbus's installed base of single-aisle ACJ318Elites and ACJ319s have risen by three and two respectively.