Factual documents recently made public by the US National Transportation Safety Board reveal that Gulfstream Aerospace did not fully investigate two wing-drop incidents that preceded the 2 April 2011 fatal crash of a G650 in Roswell, New Mexico.

Aircraft 6002, the second of five flight test aircraft in the programme, scraped its right wing seconds after becoming airborne. It then ploughed along the ground, caught fire and eventually became engulfed in flames as it exited the runway on the right side. The two pilots and two flight test engineers - who were all killed inside the aircraft by smoke and soot inhalation and burns - were performing the ninth and final test of the day as part of Flight 153, a heavy take-off weight field test performance flight with 10˚ of flaps and the right engine at idle to determine lift-off and climb-out speeds that would later be used for US Federal Aviation Administration (FAA) certification runs. The tests are needed to develop procedures that pilots will follow after engine failure late in a take-off run.

Though the NTSB has not yet published a probable cause and contributing factors in the accident, the NTSB's operational group's factual report, completed in February, hints that aircraft performance guarantees and certification schedule pressures may have trumped time-consuming safety analyses that would have shown a negative margin for stick shaker activation, meaning the stall would occur before the pilots received any warning. During the testing phase for Aircraft 6002, the stick shaker was the pilots' only tactile indicator of an impending stall. The aircraft was later to have a software-based angle-of-attack limiter that was not available at the time of the accident.

Post-crash analyses of Flight 153 by the NTSB and Gulfstream reveal that the aircraft's right wing had stalled, rolling the aircraft, just after lift-off, in large part due to incorrect pitch attitude and stick shaker targets that had been set for in-ground effect operations. The right wing stalled first due to the presence of a left crosswind and a sideslip caused by having the right engine at idle.

The NTSB says a stall can be triggered during in-ground effect operations with an angle of attack as much as 3.25˚ lower than would be needed during out-of-ground effect flight.

The investigation revealed that there had been two earlier wing drop-off events for Aircraft 6002 at Roswell, one in November 2010 (Flight 88) with the same pilot-in-command on board, and one in March 2011 (Flight 132) with the Flight 153's second-in-command on board. Gulfstream later attributed Flight 88's wing drop-off to over-rotation by the pilot, and did not analyse whether a stall had occurred at an angle of attack lower than the company predicted. For Flight 132, Gulfstream attributed the drop-off to an inoperative yaw damper and loss of directional control. The G650 programme aerodynamicist told investigators that "had flights 088 and 132 been recognized as stall events, then those events would have provided data points for [in-ground effect] stall [angle of attack] values". 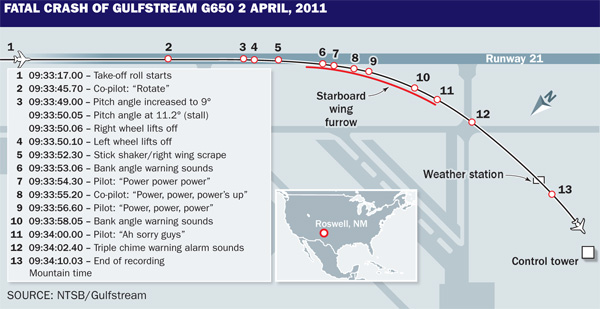 An analysis by Gulfstream after the ill-fated Flight 153 revealed an in-ground effect stall could be brought about by an angle of attack as low as 11.2˚ for the accident aircraft conditions, 3.25˚ below the out-of-ground effect stall angle of approximately 14.45˚. At the time of the accident however, the team was assuming a decrement of 1.5˚ for in-ground effect stall, leading to an angle of attack of 12.95˚. The stick shaker was also set to activate at 12.35˚, well above the actual 11.2˚ stall angle. The negative margin between stick shaker and stall meant the pilots received little or no warning of an impending or actual stall.

The post-crash performance analysis by the NTSB and Gulfstream confirmed that Flight 153's right wing had stalled as the aircraft rotated through 11.2˚ of pitch, rolling off and contacting the runway as pitch continued to increase and the stick shaker finally activated, too late. Aileron control immediately after the stall would have been ineffective due to the separated airflow near the ends of the wings, leaving the pilot with no direct roll control to counteract the drop-off. The pilots had been targeting a 9˚ initial pitch attitude for lift-off, but had decided before the test run to continue increasing pitch attitude immediately after reaching 9˚ to "capture" the desired climb-out speed (V2), which they had been overshooting in previous attempts, leading to longer than optimum take-off distances.

The 1.5˚ in-ground effect decrement had also been programmed into the G650 engineering simulator in the integrated test facility, which a Flight 153 pilot and flight test engineer used to train for the Roswell flight tests. The simulator did not include representative aerodynamics for how the aircraft wing would roll-off during an in-ground effect stall. "Following the accident, improvements were made to the ITF aerodynamic model to the take-off phase," says the NTSB, based on an interview with the head of the flight sciences group at Gulfstream.

Before March 2011, Gulfstream had used more conservative buffers, including a 2˚ in-ground effect decrement, a heritage number based, in part, on testing from the Gulfstream IV and low-speed wind tunnel tests on the G650, says the NTSB. The stick shaker in a previous test campaign was set to activate 1.2˚ below the in-ground effect stall angle of attack. Based on the post-accident analysis, the settings would have provided pilots with stick shaker activation at approximately the same angle of attack as the in-ground effect stall for the conditions present during the accident.

Gulfstream said it was unable to comment, but the company will have the opportunity to comment on the NTSB's findings before the investigation is closed.

As the US National Transportation Safety Board's investigation of the G650 accident winds down, documents revealed by the NTSB show a war of words between the Board and Gulfstream that threatened to sour relations between the two and potentially derail the safety probe.

In a 4 April 2012 letter to Gulfstream president Larry Flynn, NTSB chairman Deborah Hersman reiterated a shopping list of complaints that had been registered over Gulfstream's behaviour during the investigation since its launch last April.

Included was non-compliance with instructions from the NTSB investigator-in-charge relating to quarantine of accident-related telemetry data. A failure to follow the NTSB's prohibition on company lawyers getting involved in the accident investigation was raised, along with unexplained missing evidence, including a computer hard drive containing accident-related telemetry data and flight-test notebooks, "both of which Gulfstream had been asked to safeguard because they were of significant interest and value to the investigation".

Gulfstream was also accused of withholding relevant information relating to the existence and results of an internal safety audit following the crash, and "combative and argumentative behaviour on the part of Gulfstream's legal counsel during witness interviews".

In an earlier letter Flynn denied any wrongdoing, including Gulfstream's use of a copy of telemetry data sent to Savannah after the crash.

"As soon as it became clear that Gulfstream would not be able to convince the NTSB to allow us to keep or continue using the copy of the telemetry data in our possession, Gulfstream, at the direction of the NTSB, ordered all employees who had been given access to the data to immediately cease using it; and either sequestered or destroyed all paper and electronic copies of the data or any analysis derived from the data," he wrote.

Flynn points out that the NTSB later provided Gulfstream with another copy of the telemetry data for its use without an audio track.

Regarding a missing hard drive containing telemetry data, Flynn says the US Federal Bureau of Investigation determined the drive had not been stolen but "rather had likely been inadvertently discarded in the trash by the employee charged with its safekeeping". He adds that Gulfstream "terminated that employee's employment".

On the internal safety audit, Flynn says the "group of experts" who looked at the "safety practices and culture in all of Gulfstream's flight-test and flight-operations activities" did not perform a review of the accident "in order to avoid any conflict with the NTSB investigation". "At no time did Gulfstream seek to delay NTSB activities as a result of the third-party safety review," says Flynn.

"Based on the results of the review, Gulfstream created and implemented a safety action plan," says Flynn. "We provided to the NTSB the presentation describing the safety action plan that was presented to our flight-test and flight-operations organisations," he adds.

The genesis of the reduction in safety margin is not completely clear from the NTSB documentation.

One of the accident flight test engineers had proposed cutting the in-ground effect angle of attack decrement from 2° to 1.5° in March 2011, but the action, which would have helped take-off performance, may have indirectly resulted from a 11 February 2011 meeting at which Gulfstream officials discussed initial field performance test issues, including "that the speeds were high and take-off field lengths were longer than the G650's 6,000ft [1,830m] take-off field length (+/-8%) guarantee". Though the guarantee applied to a take-off with flaps at 20°, Gulfstream planned to use the performance of the aircraft with one engine inoperative and flaps at 10° the configuration on the accident aircraft to replicate "competitive-based performance take-offs at high airport elevations".

Despite the open NTSB investigation, Gulfstream expects to receive final US Federal Aviation Administration certification in the second half of the year for the G650, its largest, fastest and longest-range business jet to date. The company plans to deliver 24 green and 17 completed G650s this year under a provisional type certification it received in late November 2011. It has orders for more than 200 of the $65 million Rolls-Royce BR725-powered, fly-by-wire twinjets.