The Indian navy’s formal requirement for 57 multirole carrier-borne fighters (MRCBF) has been advanced via a request for information (RFI) issued by the nation’s defence ministry. Responses are due by 24 May, with the service having detailed its requirements over 59 pages of parameters and specifications.

In its RFI, the navy calls for a fighter that can undertake roles ranging from air defence and surface strike to reconnaissance and electronic warfare, and which is capable of performing “buddy” tanking. The request also expresses an interest in licence production of the aircraft with related transfer of technology.

A substantial weapons capability is also requested, in addition to the possibility of integrating existing and future weapons and avionics systems of Indian, Russian and Western origin.

Information is also being sought on whether the aircraft has a swing-role capability for the simultaneous carriage of strike weapons and air-to-air missiles. Some under-wing pylons should be capable of carrying stores weighing up to 1,500kg (3,300lb), with the ability to release weapons from an altitude of 40,000ft.

The selected type will operate from indigenously developed aircraft carriers that are currently under construction. While the first of these – to be named the INS Vikrant – features a ski-jump layout with short take-off and arrested recovery, the configuration of a second vessel has yet to be frozen.

Contenders for the MRCBF requirement are Boeing’s F/A-18E/F Super Hornet, Dassault’s Rafale M (below) and the RAC MiG-29K. The last of these types is already in Indian navy service. 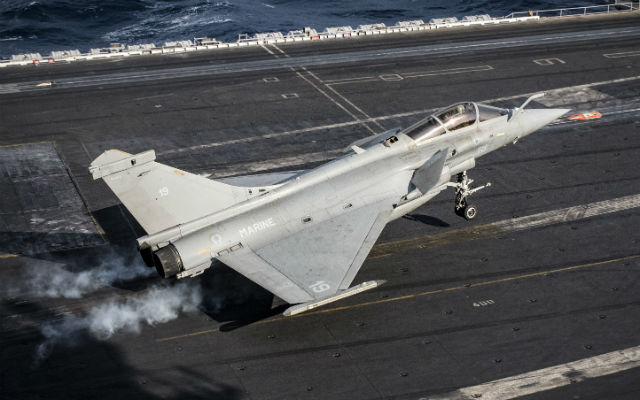 New Delhi’s request for information delivers a blow to its indigenous efforts to develop a naval variant of the Tejas light combat aircraft (LCA), which have been under way since 2003. The Aeronautical Development Agency expects to begin flying LCA navy Mk2 prototypes from 2020.

India’s naval aviation arm currently has two operational squadrons of MiG-29Ks. These are embarked on the aircraft carrier INS Vikramaditya and also flown from two naval air stations, on the nation’s west and east coasts. The Russian-built type will also be operated from the future INS Vikrant.