Preliminary information from Spanish investigators details for the first time the sequence of events prior to the Spanair Boeing MD-82 crash, and the dynamics of the 20 August accident.

After arriving from Barcelona the aircraft parked at gate T21 of Madrid Barajas' Terminal 2, and took on 10,130 litres of fuel in preparation for operating flight JK5022 to Las Palmas, scheduled for 13:00.

Its first attempt at departure, at a weight of 64.5t, proceeded as follows:

The aircraft returned to park on remote stand R11, which is situated almost opposite gate T21.

The RAT probe is linked with a relay, designated R2-5, which also has a common electrical link with the radio-rack cooling system, alternating current cross-tie, and - perhaps most critically - the configuration-warning system.

This warning system is normally active only on the ground, and is inhibited through the R2-5 relay once the aircraft is airborne. Similarly the RAT probe heating is normally only active during flight.

After the engineering work was completed, flight JK5022 made a second attempt to depart:

14:08.15  After taking on board another 1,080 litres of fuel the MD-82 leaves the remote stand R11 for a runway 36L departure. From this point onwards the flight-data recorder registers zero flap deployment, up to the end of the recording.

14:23.19  Brakes released. From this point onwards the cockpit-voice recorder reveals no evidence of a configuration warning. 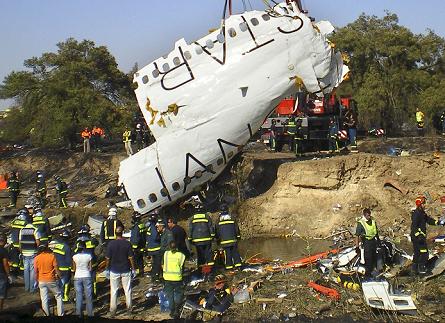 Impact marks from this contact were discovered 60m to the right of the 36L centreline and 3,207m from the runway's threshold. Runway 36L has a length of 4,350m.

The aircraft travelled around 448m on a heading offset from the centreline by about 16°. Uneven terrain meant the jet lost ground contact, then regained it, the main part of the wreckage coming to rest some 1,093m from the initial ground strike.

Both engines separated from the aircraft. Investigators found the starboard engine's thrust-reverser, in the stowed position, about 235m from the first ground impact point. The port engine's reverser was found deployed, about 913m from this point.

At least one flap-actuator piston was found partly extended, by a distance of 12cm, but the inquiry has not yet attached any significance to the discovery.

Investigators do not suspect any fault from the engines, the thrust-reversers, control surfaces on the empennage, or the undercarriage.