INSIGHT FROM AMADEUS: Airline disruption - soon to be a problem of the past?

I spend a lot of my time on the road, and one of the first topics of conversations when I land is: “How was your trip?” Frequent travellers know that it only takes a small delay during one part of your travel plans to upset the rest. We know that some disruption can be unavoidable – with weather or strike action often being the top two culprits. What can be improved, however, is the recovery and communication plan to reduce uncertainty and limit social media outbursts in times of frustration.

An example that is still fresh in my mind, although it now happened back in 2010, was the volcanic eruption in Iceland. The volcano Eyjafjallajökull (don’t ask me to repeat that at a dinner party …) had a major impact on travel over western and northern Europe for about six days in April. I was expected to travel for business at the time and had to resort to dialling in by video conference instead. Doesn’t quite do the same for customer relationship building but I had to be flexible! 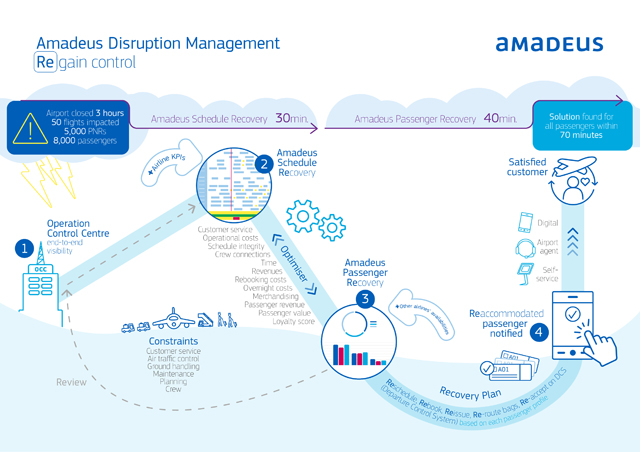 Disruption, whether it’s due to external or internal factors, has an important effect on airlines not only in terms of customer frustration and brand damage, but due to the direct costs too. Aviation technology consultancy T2RL recently released a report, “Shaping the future of Airline Disruption Management”, in which it estimated that the cost to the industry is as high as $60 billion annually, which is a staggering 8% of global airline industry revenue. The problem itself is huge, but to date only limited progress has been made by the industry in terms of tackling the impact of disruption and adopting a cross-industry approach.

However, we are now seeing an increased focus on disruption, and its potential solutions, due to several factors:

These factors are driving a renewed push to solve one of the most complex mathematical and technical problems our industry must address. An airline’s schedule is like an enormous jigsaw puzzle – one that has to fit closely with other puzzles belonging to airports, ground handlers, and other support companies – and when disruption occurs it’s similar to someone throwing the pieces of this carefully balanced network high in the air. This kind of complexity can only be managed by strong IT capabilities involving the integration of multiple databases, the application of data analytics and machine learning.

This is where Amadeus can step in. We supply our airline customers with fully integrated IT tools, managing everything from ticketing to departure, from ancillary services to the all-important loyalty programmes. This information then feeds into the operations systems of the crew and ground handling companies, so that when the unexpected occurs, the airline’s operational control centre has a full picture of the problem at hand, and passengers can be re-accommodated automatically, based on their individual customer profile with the airline.

Finally, that recovery plan needs to be clearly communicated to customers via multiple channels e.g. self-service, mobile and airport agents.

Have a look at our video for more insight into how this works:

And this is just the beginning. As industry players increasingly work together to tackle this issue, accompanied by the arrival of new technologies, we expect to see more breakthroughs happening soon.