Back in December 2010, the commercial aviation world was in a substantially different place from where it is today. Airlines had just lost more than $30 billion at the net level over the previous couple of years, crude oil prices had averaged around $80/barrel over the prior three years and, although it was not apparent then, prices would average $100/barrel for four years after that.

Bombardier was in the midst of developing the CSeries next generation single-aisle, using the new Pratt & Whitney PW1000G geared turbofan (GTF) engine with promises of a 20% improvement over current-generation aircraft fuel burn.

It was against this backdrop that Airbus took the momentous decision to launch its next-generation A320neo, offering both the GTF and CFM Leap-1A new engine options to deliver fuel burn savings of 15% over its current-generation A320 family. In the face of this evolving competition, it was not long before Boeing followed suit and offered its own new derivative of the ubiquitous 737 family – the Max – this time with a single new engine option of the CFM Leap-1B.

Fast forward to 2016 and both programmes are flying: the A320neo is actually in revenue service and the 737 Max 8 in a flight-test programme that promises delivery of the first aircraft to launch operator Norwegian in May 2017. But in the meantime, crude oil prices have declined significantly and the operating cost/fuel efficiency imperative that drove Airbus and Boeing to launch these new derivatives has eased fundamentally. This has driven many to question both demand for – and the value of – the Neo and Max in this new paradigm.

First of all, there is the question of demand. In mid-August, the A320neo and 737 Max had firm order backlogs of 4,620 and 3,280 aircraft, respectively. These backlogs have been built over 68 and 56 months since launch.

Most interestingly, since crude oil prices began their decline from $110/barrel in June 2014, net orders for 2,003 Neo and 1,182 Max aircraft have been placed, representing 43% and 36% of the backlogs today, respectively. At face value then, demand for the two aircraft programmes remains as robust today as when they were launched.

The pace of orders suggests 737 Max monthly order volumes have slowed. But given that Flight Ascend Consultancy analysis indicates there are limited open slots before the early part of the next decade, it is not surprising that airlines and lessors are slowing their pace of commitment to the aircraft now. What is surprising, however, is that there has not been a similar slowing of order placement for the Neo. 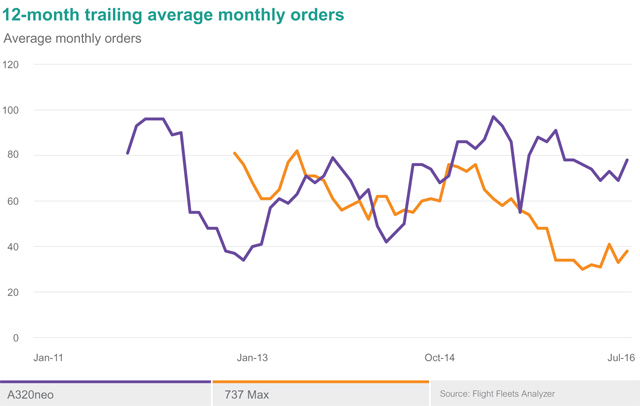 Given that the same analysis indicates the Neo has a similar open-slot situation to the Max, it would be unsurprising if the former’s monthly orders started to slow as well.

This slowing is not a function of weakening demand, but rather a sign that customers are not at present willing to commit to deliveries in six or more years’ time, which would entail accepting manufacturer price escalation that would drive delivery prices to increase, perhaps well ahead of inflation, over that period.

So Neo and Max demand is expected to remain robust for now, even in the face of lower oil prices.

There are also subsidiary benefits from lower fuel burn, even if not directly driving to the bottom line. With lower fuel burn comes lower emissions, which in turn could drive cost benefits if – or more likely, when – emissions charges become a more significant element of airline operating costs. And lower fuel burn also acts as a natural fuel hedge, if – or again, when – crude oil and jet fuel prices finally start to increase again.

In the meantime, if demand is not weakened fundamentally in the face of lower oil prices, then the lease rate and value of the aircraft are almost certainly affected. As the lower chart illustrates, there are different stories regarding Flight Ascend Consultancy’s current market lease rate (CMLR) opinion for a 2015-build A320neo compared with the equivalent A320ceo. 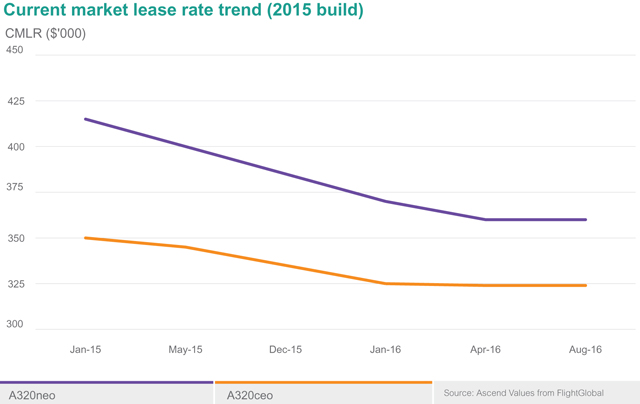 Since January 2015, the lease rate for the A320ceo has declined by about 7%, which is largely driven by the impact of one year’s depreciation. By contrast, the equivalent lease rate for the A320neo has declined by 13%. Although this decline contains some element of depreciation, there is also an element of calibration here with the recently observed market lease rates, which are slightly lower than those hypothesised in early 2015.

The market does not seem to be valuing the fuel-burn benefit of the new variant as highly as Flight Ascend Consultancy had originally supposed.

The final validation of this point is an analysis of the operating cost of the two variants. Using simple assumptions on fuel burn and maintenance cost deltas, together with standard market utilisations, it is possible to calculate the monthly lease rate premium offered by the Neo to derive equivalent block hour direct operating costs (DOC). The lower chart illustrates this relationship and indicates that at the current jet fuel price of $1.21 per USgal, the lease rate delta for the aircraft is between $30,000 and $35,000 per month.

The CMLR delta on the two variants is presently $35,000 a month, indicating perhaps that the market is taking a very similar view from this calculation to arrive at the additional lease rate value of the new variant. Similar logic applies to the Boeing 737NG and Max, although with first delivery of the latter not due until next year, base lease rates have to be considered. 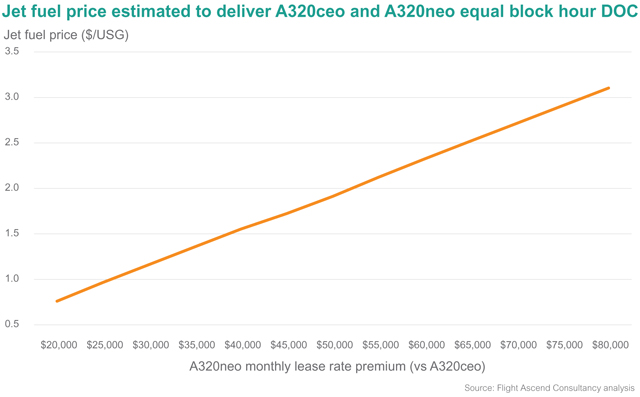 At present the premium hypothesised for the latter is slightly higher at $53,000 a month (for the Max 8 over the 737-800). This is indicative of the longer-term view that the premium should be higher than where it is today.

But as the Max arrives in the market, perhaps in the short-term there will be a slight reduction in this premium, as happened with the A320neo.

So as fuel prices have eased, it does not appear that demand for next-generation single-aisle aircraft has fallen. Rather, it is simply that the price/value at which these aircraft can be placed in the market has, for now, taken a slight pause.

In the long term, crude oil and fuel prices are likely to increase once again, and with this increase, the longer-term value of fuel efficiency is also likely to manifest itself in robust lease rates and residual values for these aircraft.